Established as America’s — and the world’s — first national park in 1872, Yellowstone National Park remains one of the most beloved national parks within the National Park System today. Known for its breathtaking geysers and stunning vistas, Yellowstone also holds the largest concentration of mammals living in one location in the Lower 48. The overwhelming varieties of wildlife that call the park home draw in more than four million eager visitors each year.

While the peak visitation season is during the summer months, visitors aren’t always ensured top viewing. The number of tourists and vehicles moving through the park can disrupt animal movements, pushing them farther back from the roadways and hiding them from view. It’s a different story during the winter though. Park visitation drops to around 20,000 a month and roadways once passable during the summer are covered under a thick layer of snow. Most of the animals move toward the western entrance of the park near the Geyser Basin, where the ground is warmer, and areas with low snowdrifts along the Firehole and Madison Rivers, which are easier to navigate. It’s good news for winter visitors who want to tour the park and enjoy the its other natural features without scores of other tourists around.

The white blanket of snow throughout the park makes it easier to spot the animals from a distance, too. Meanwhile, less traffic and people density encourage the animals to roam more freely, allowing visitors to view them virtually uninhibited. Here’s a look at just a few of the animals you can expect to see during a wintertime visit: 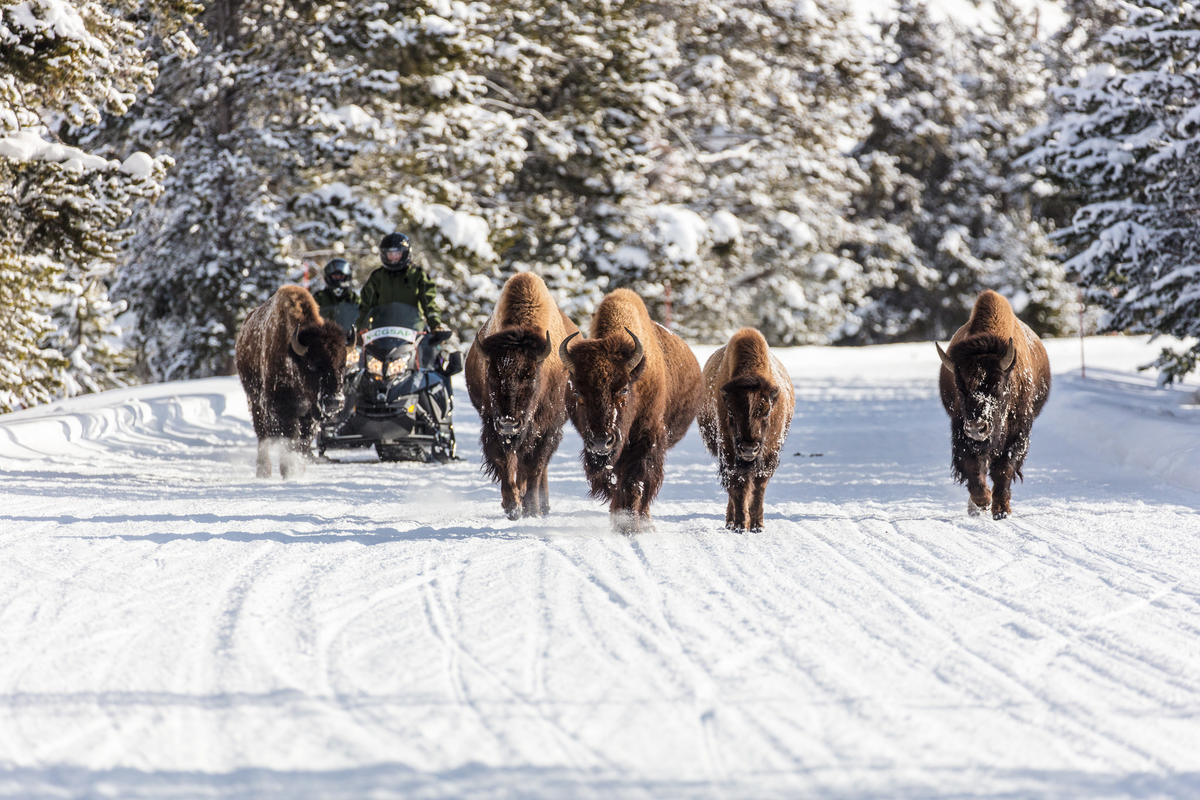 As synonymous with the park as Old Faithful, the American bison are one of the park’s most popular — and most frequently sighted — animals. The bison, which have lived in the park since prehistoric times, meander through the two million acres of the park at their leisure, so much so that they’re known to cause a classic buffalo traffic jam for drivers in the winter and summer months as a result. Though herds can be upwards of 200 in the summer, they shrink in size in the winter to around 20. The smaller winter groups tend to stick toward flat areas of land — where they can easily use their heads as snowplows of sorts to navigate the winter terrain — and the hydrothermal pools in the geyser basin where both the ground and the air are warmer. 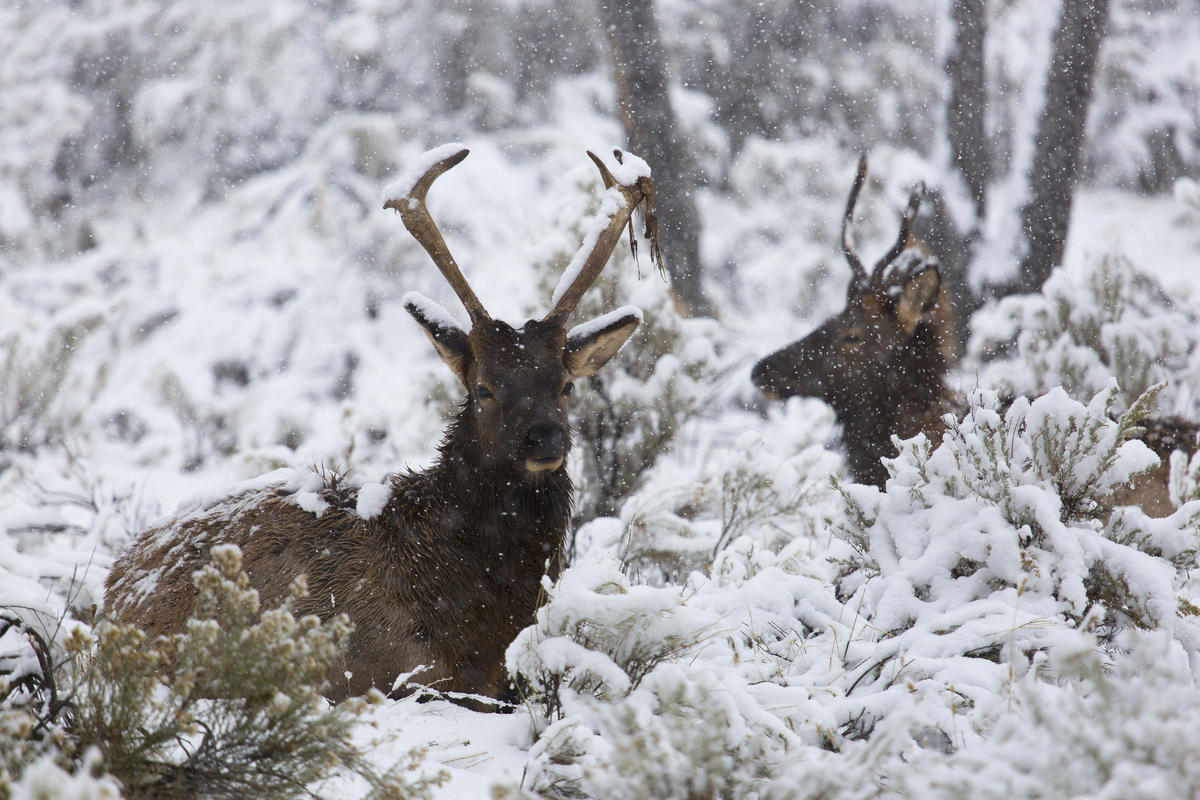 Bull elk are the most photographed animal in the park — even more than the bison! It’s largely due to the size of their antlers and the sheer number of them living within Yellowstone. Anywhere from 10-20,000 elk live in Yellowstone, however, less than 100 remain along the Firehole and Madison Rivers during the winter months. Because this specific group of elk is the only herd that occupy the park year-round, park rangers and researchers know quite a lot about them, including their seasonal movements. As a result, you’re likely to see them in the late evening along the ridges as you exit the western entrance of Yellowstone. 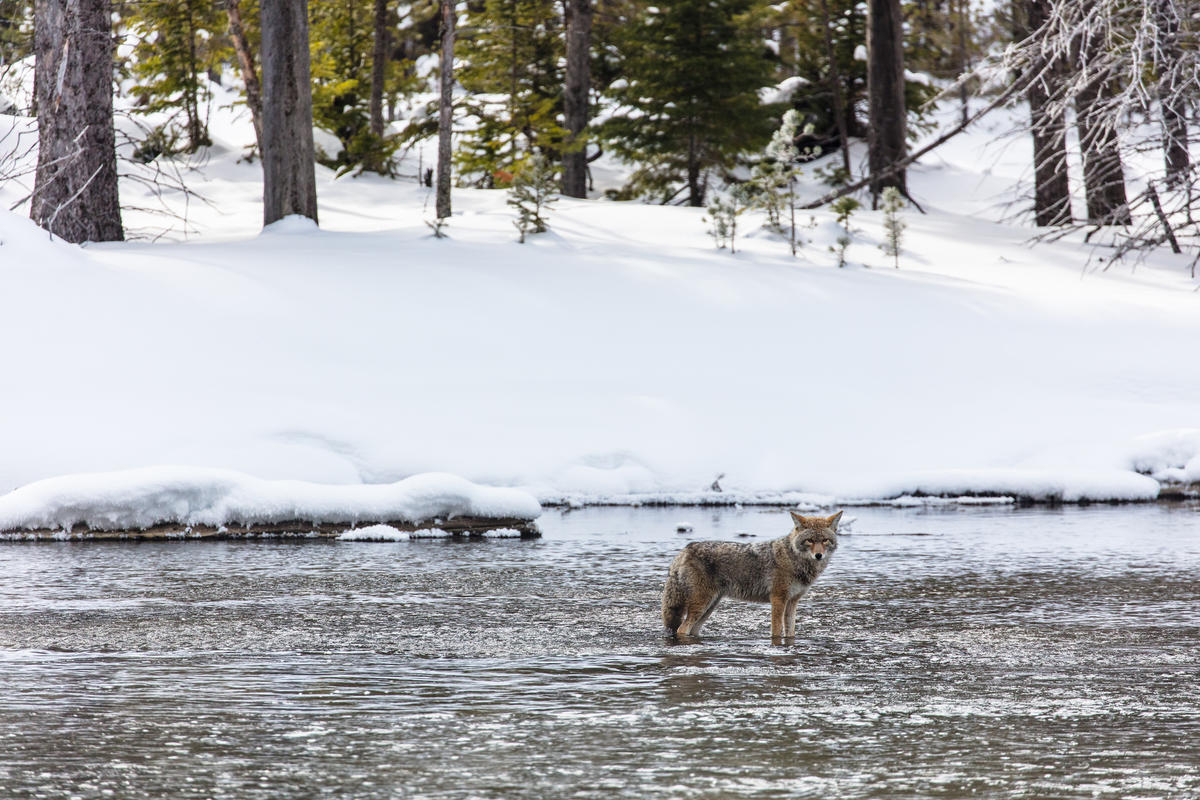 Coyotes and foxes take advantage of the cool weather to hunt mice and other small animals in the meadows. The low-lying areas and snowy landscape make them easy for tourists to spot them. Up until 1995 when gray wolves were reintroduced to Yellowstone National Park, the coyote’s only predator was the cougar. As a result, there is an incredible number of coyotes within the park — even today. 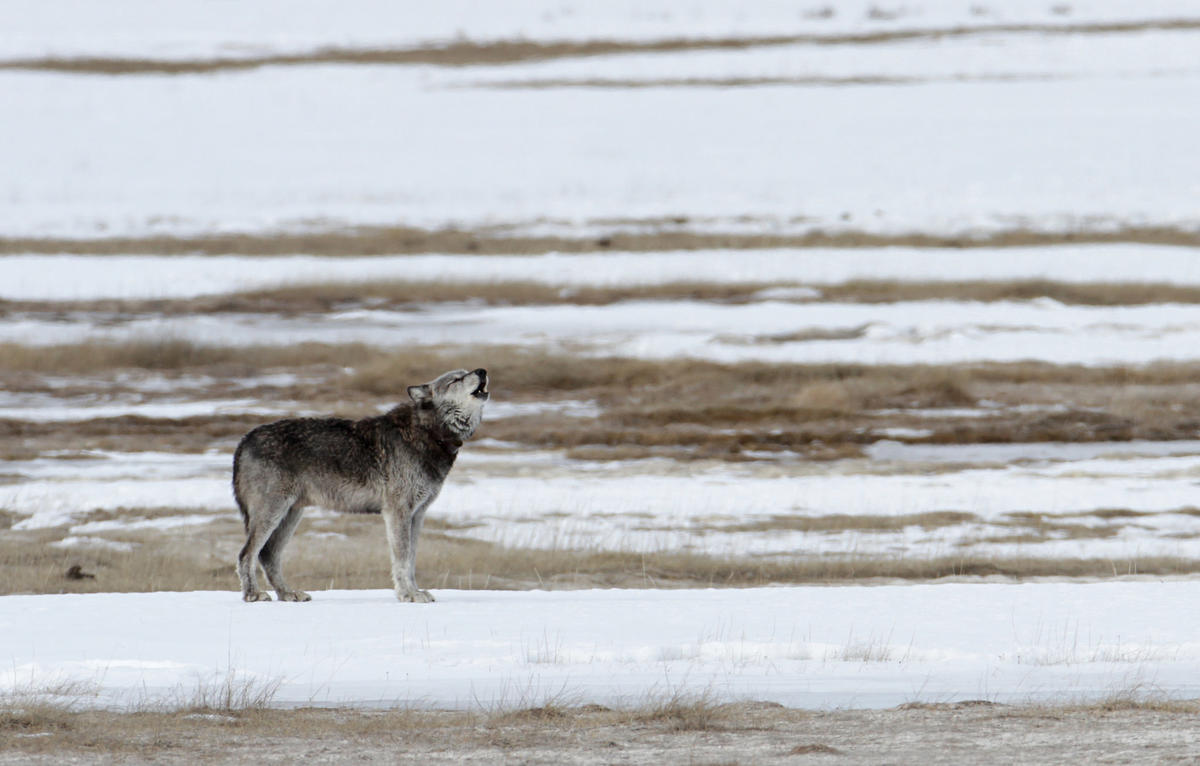 Successfully reintroduced to the park in 1995, there are now just over 100 gray wolves in 10 different packs living in Yellowstone year-round. These wolves are more likely to be seen in Lamar Valley toward the northern end of the park; however, based on current activity, these animals have been spotted at dawn and dusk throughout the park and even in the Lower Geyser Basin area, especially during mating season in February. If you don’t see any during your winter snowcoach tour, don’t worry. The Grizzly and Wolf Discovery Center in West Yellowstone is home to six wolves year-round. The rescued wolves can be heard howling early in the morning and again at dusk. The center is open seven days a week, 365 days a year and admission to the center is good for two consecutive days. 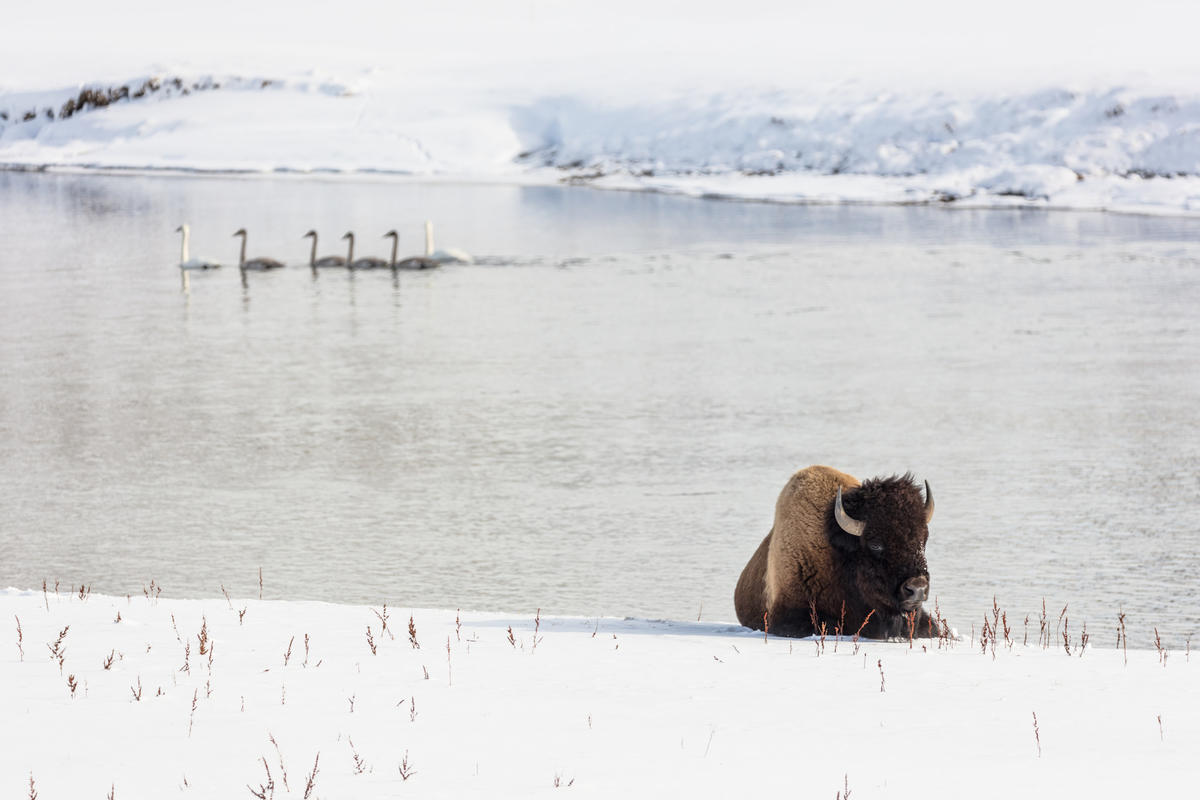 Perhaps one of the most underrated animals in the park, the trumpeter swan is the largest wild waterfowl in the continental US. With a wingspan of eight feet, the huge birds that mate for life are, unfortunately, becoming more of a rarity within the park. Due to climate change, the number of trumpeter swans in Yellowstone has been in decline — there are currently less than 30 in the entire area. Park rangers introduced a release program in 2014 in hopes to strengthen the number and encourage mating and bonding between the males and females. For now, visitors on a snowcoach tour from West Yellowstone are most likely to see these magnificent birds swimming in rivers with open water, like the Firehole River, from December through February. 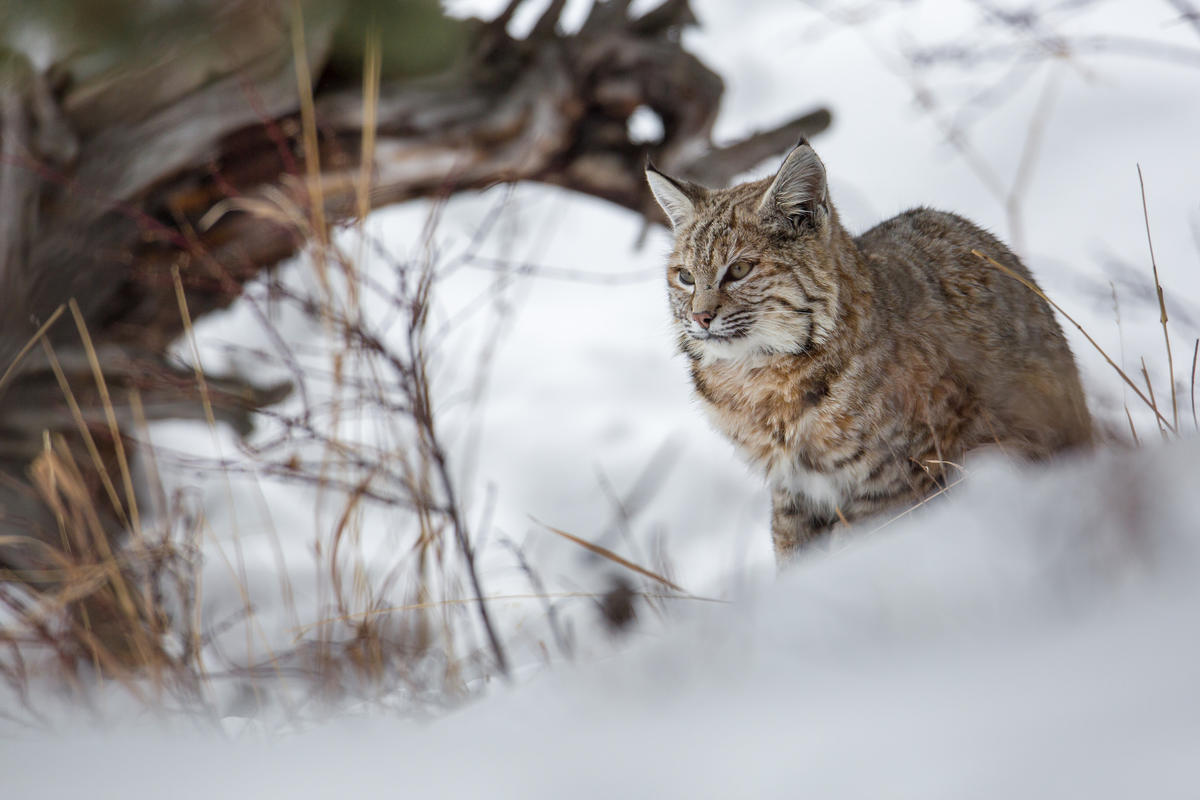 Park guides will tell you that — when spotted — bobcats work it for the cameras, idly grooming and stretching as photographers flock to capture their every movement. It’s like they’re aware how much of a big deal they are. Bobcats are highly intelligent, easily blending into the countryside, as they hunt for rabbits and mice. They’re rarely seen and park guides joke they only come out if they know there’s a camera at the ready. If you enter or leave the park during sunrise or sunset, keep your eyes peeled — and your camera handy — for them along especially rocky areas and low-lying river basins. As of winter 2018, one bobcat has been often spotted near Madison Junction, stealthily waiting to model for the cameras.

Visitors are given almost exclusive access to the park and its hundreds of animal residents during the winter months. The best way to see these animals is by snow coach or snowmobile tour with a tour operator out of West Yellowstone, the closest town to the western entrance of the park. Winter tours operate through March 15th, allowing guests plenty of time to visit. With the downtown located just a few blocks away from the park and plenty of overnight accommodations available, West Yellowstone is perfectly situated for wildlife and winter adventure lovers to explore both the park and the town at their leisure. Click here to begin planning your winter getaway.