By Audarshia Townsend
Save

Some of the best summer memories are synonymous with hot dogs, peanuts and nachos at the ballpark. But as your taste buds evolve over the years, so have your team's culinary offerings and stadiums across the country have stepped up their (food) game in a big way. You'll find buffalo chicken waffle fries at Wrigley Field, crab mac-and-cheese dogs at Camden Yards and plenty more creative fusion creations. But don't worry. While a number of professional baseball stadiums have gone gourmet, most dishes are not so fancy that they're unrecognizable from the hometown favorites. Whether your team's hitting it out of the park or stuck in a slump, these delectable dishes are reason enough to plan a trip to the 'ole ball game.

Here's where to devour some of the most imaginative -- and tastiest -- bites in the country. 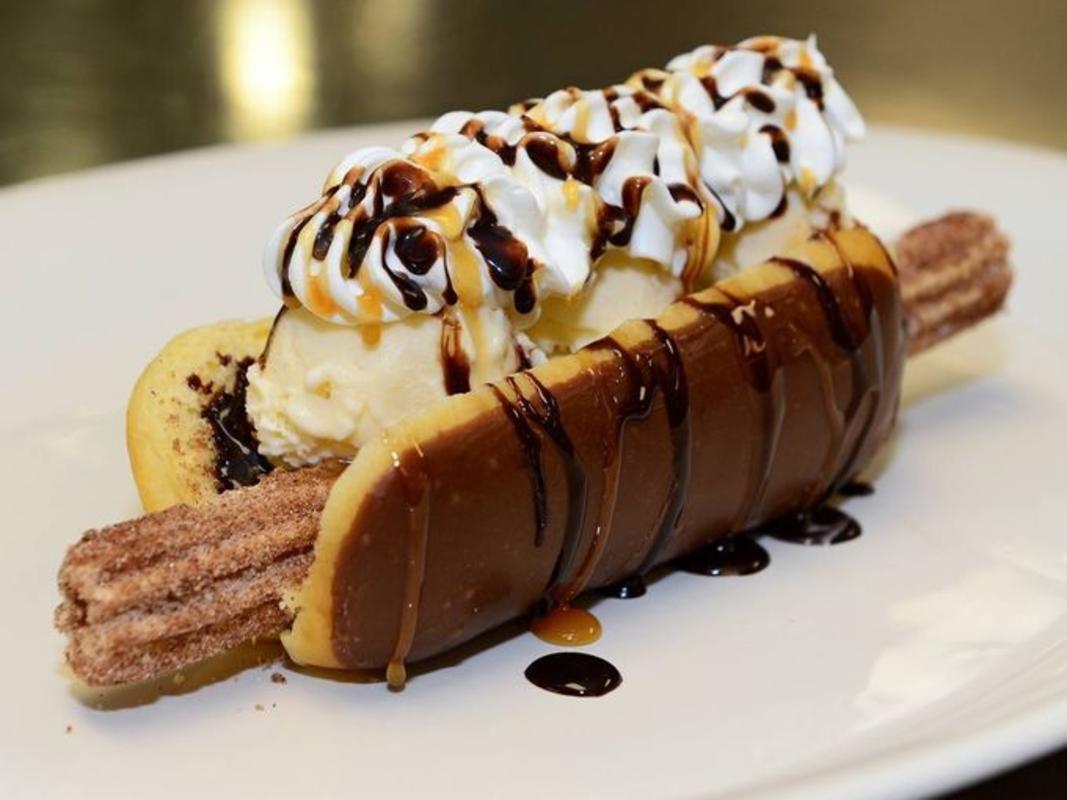 The Team: The Arizona Diamondbacks is the state's first-ever National League Baseball team, and its home is Chase Field, which was built in 1998. The ballpark covers approximately 1.3 million square feet, including the playing surface, and is divided into six levels: the field, the main concourse, the press level, club suites, the upper concourse, and the mechanical level.

The MVP: The churro dog (pictured) is a masterpiece, made of a warm cinnamon churro sandwiched between a sliced chocolate-glazed Long John doughnut. It's topped with frozen yogurt, whipped cream, caramel, and chocolate and is basically the ultimate decadence. You can find it in sections 114 and 123. 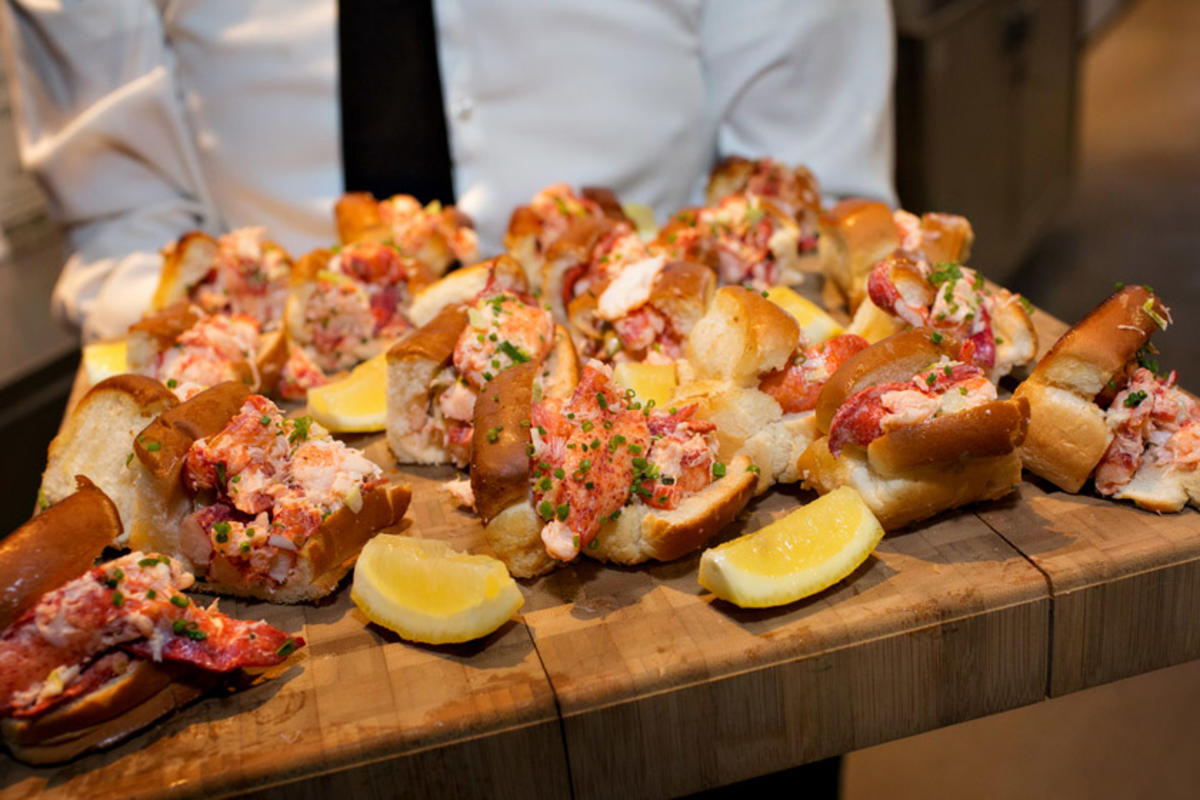 The Team: The Red Sox boast eight World Championships. Housed at Fenway Park, which opened in 1912, it is the oldest stadium in the franchise and one of the most iconic spots in America.

The MVP: It should come as no surprise that Fenway sells classic New England lobster rolls. You can get them at Gate D Concourse on the pavilion level. 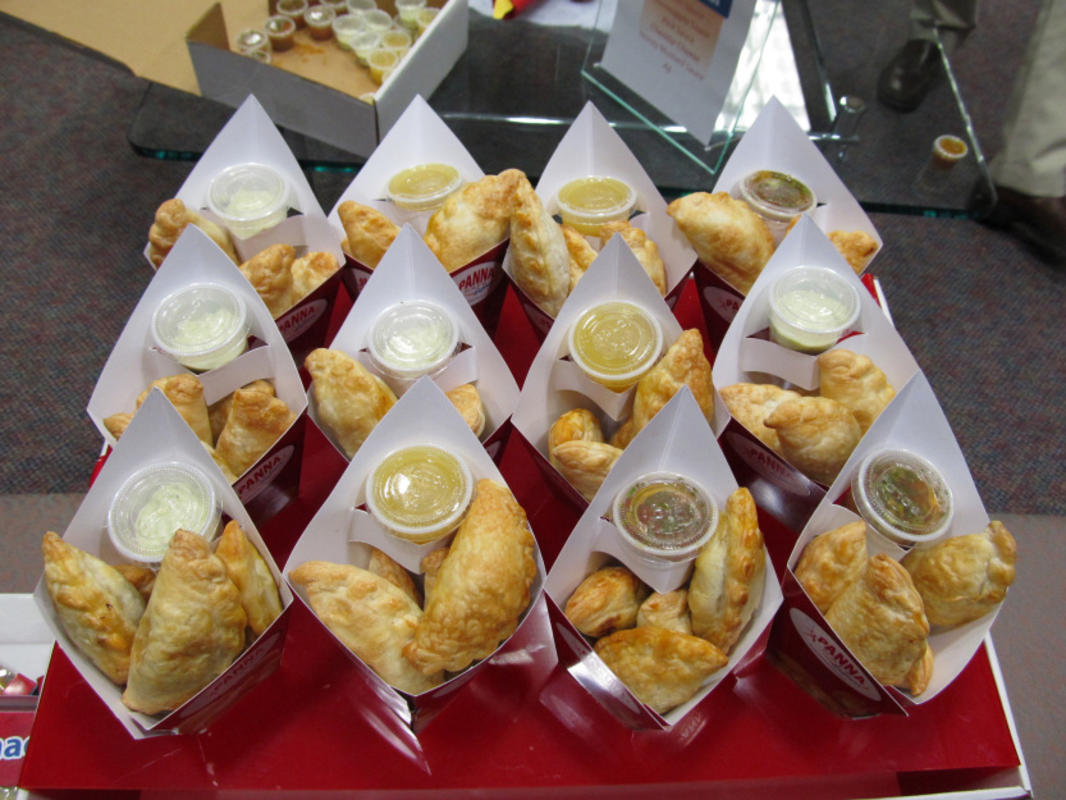 The Team: Part of the National League, Marlins Park opened in 2012. LEED certified, it was designated the "greenest" MLB stadium that same year. It has a seating capacity of 37,442.

The MVP: At Taste of Miami (section 27), you'll find miniature empanadas (pictured) stuffed with all kinds of delicious shredded meats. Wash it down with a libation from Miami Brewing Company beer. 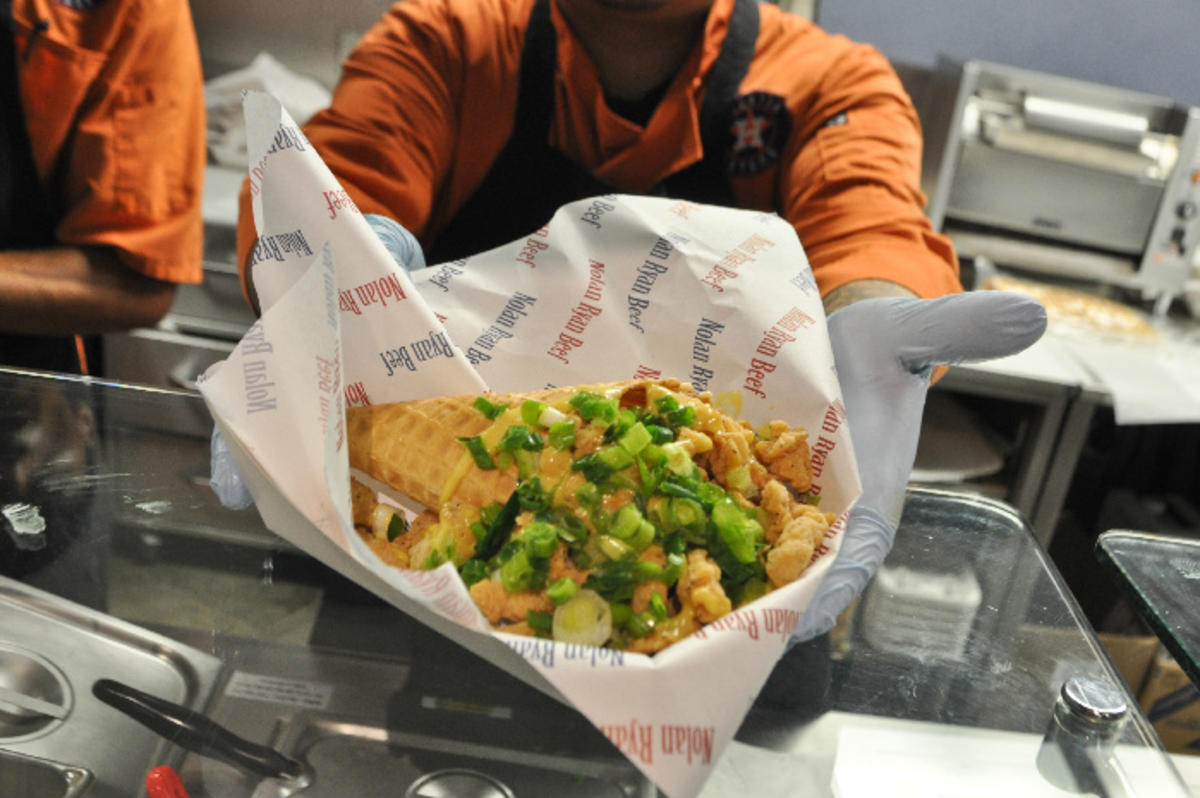 The Team: The Houston Astros, a National League franchise, calls Minute Maid Park home. Opened in 2000, the ballpark has a seating capacity of 41,676, which includes 5,197 club seats and 63 luxury suites.

The MVP: The chicken waffle cone (pictured), stuffed with mashed potatoes, fried chicken and honey mustard sauce, can be found at Street Eats, sections 124 and 408. 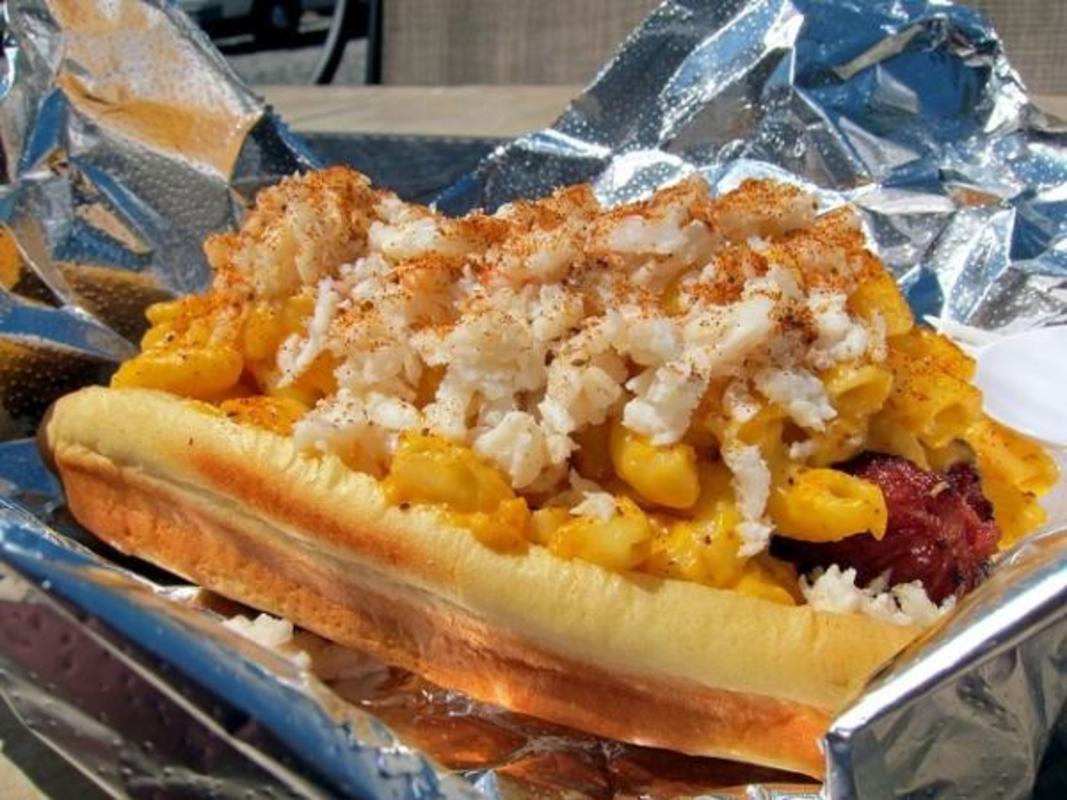 The Team: Home to the Orioles, Camden Yards is situated in downtown Baltimore. Clearly catering to sports-loving foodies, a picnic area is located above and behind the bullpens for fans to indulge and enjoy. 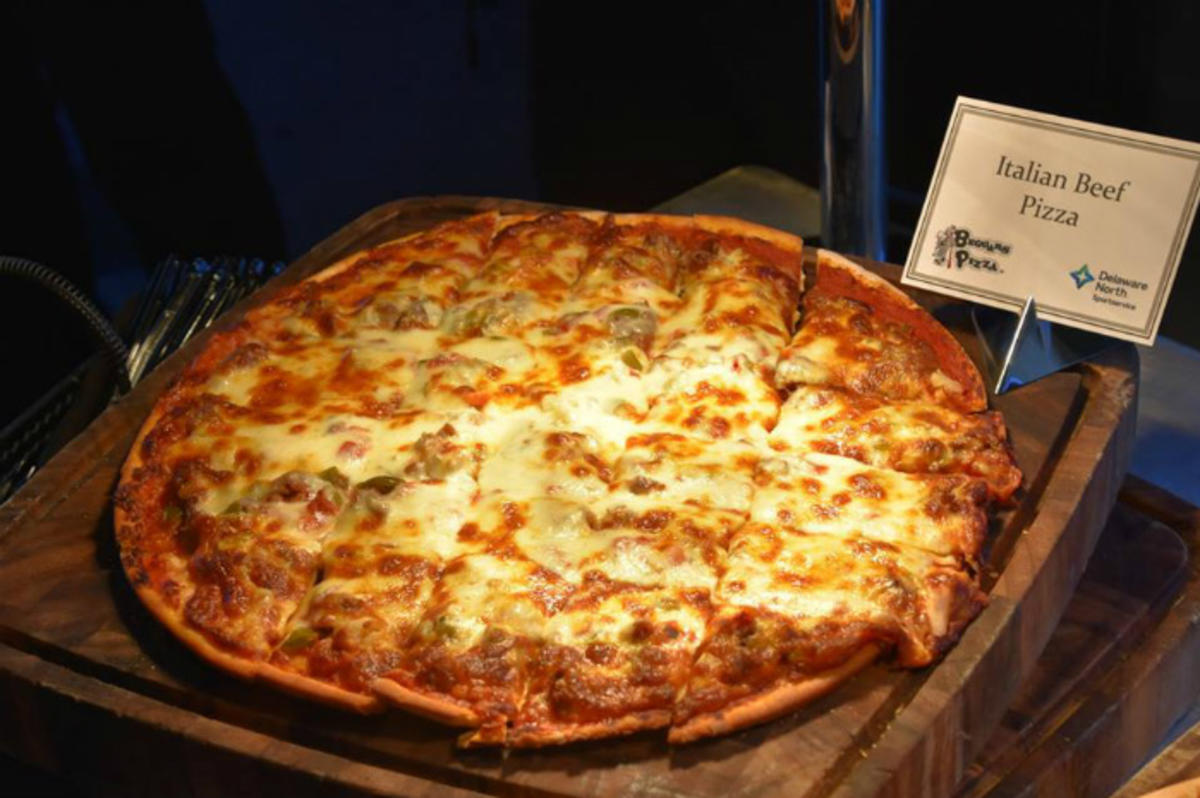 The Team: Home to the Chicago White Sox, the park opened for the 1991 season; previously it was Comiskey Park for 81 years. Its capacity is 40,615.


The MVP: While Chicago is primarily known for its deep dish, Beggar's thin crust pizza topped with Italian beef and giardiniera is nothing to sneeze at either. You can find it at the brand new Beggars Pizza Pub near Section 163.

The Team: The beloved Chicago Cubs have called Wrigley Field home since 1927 (It was previously named Cubs Park). Nicknamed "the Friendly Confines," it is the second-oldest ballpark in the country.


The MVP: Exotic encased meats are the name and there are 25 different options available throughout the ballpark. Gilbert's Grill Cart in the main concourse, Hot Doug's in the Budweiser Bleacher and High Plains Bison Grill Cart offer a variety of rotating dogs, such as The Joe Wallis (a curry brat topped with curry dijonnaise, caramelized onions and smoked gouda) and bison dogs.

The Team: Home to the "love them or hate them" New York Yankees, Yankee Stadium was the most expensive ballpark built to date. Costing $2.3 billion, the new facility opened in 2009 and replaced the original stadium, which was located one block north.


The MVP: Intended for sharing, the "tape measure cheesesteak" is a two-foot long cheesesteak topped with white American cheese or Cheez Whiz and served on a classic hoagie roll. It's available at Carl's Steaks in section 107.

Audarshia Townsend appears regularly on Chicago's top-rated "WGN Morning News" as an expert on cocktail culture and restaurant trends. She is also the Chicago Travel Expert for about.com.

Weird Food and Drinks You Must Try in Iceland: Puffin, Shark and Whale, Oh My