As much as we all love greasy Chinese take-out, some advice that your fortune cookie is not going to tell you: if you want to get a taste of authentic China cuisine, you need to go straight to the source. Most Westerners are only familiar with Cantonese cooking, but there are actually seven major styles of influence of China cuisine. Seize the opportunity to explore the diverse tastes of China across the many culinary and regional variations.

Here are some of our favorites, and what makes each so uniquely delectable. 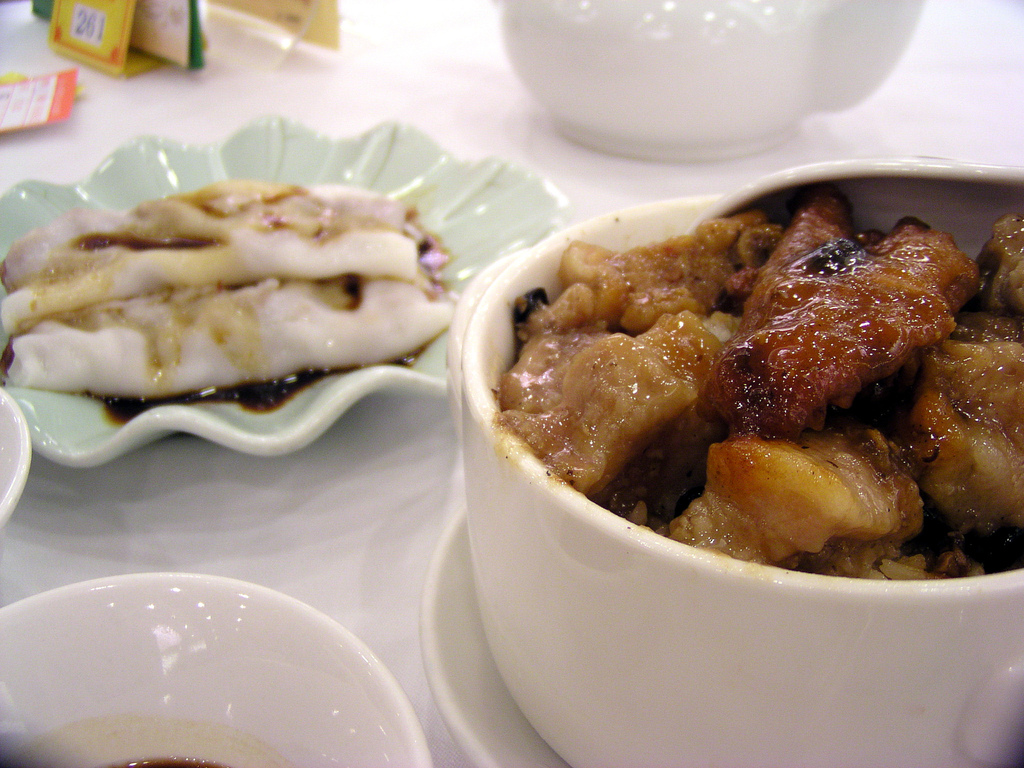 Cantonese, the most common type of China cuisine originated in the Canton region of Southern China, is known for its fresh ingredients and light, simple spices such as ginger, white pepper, soy sauce, and spring onion. This fertile region's proximity to the sea allows Cantonese food to boast a wide variety of ingredients. Cantonese fare is famous for Dim Sum, a meal consisting of small, single-portion dishes that are generally either sweet or salty. If you are going out for Dim Sum in China, don't be afraid to stray away from the familiar fried foods available at your local Chinese restaurant. You might discover something different and truly delicious, like Chang Fen -- a four-inch wide noodle with shrimp and mushrooms in a tasty brown sauce. 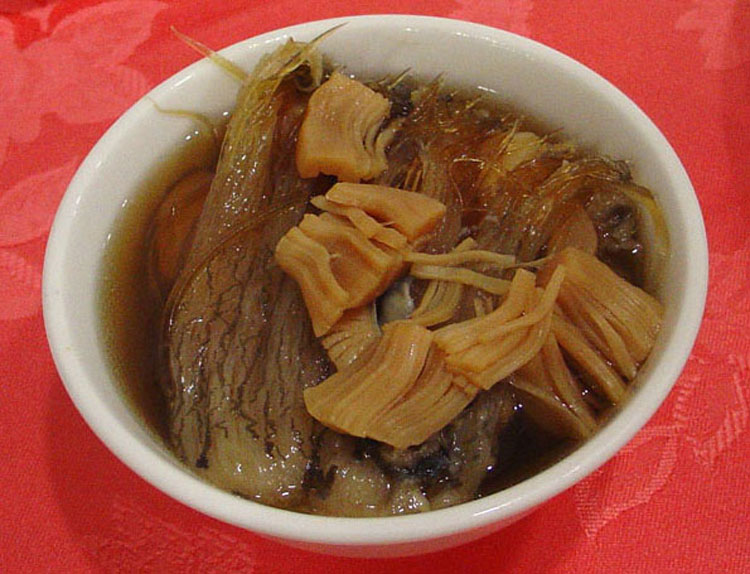 Fujian cuisine is known for its tender, flavorful, and light dishes served mainly in soup. The Fujian province is located on the Southern coast of China making the regional cuisine renowned for its choice seafood. Fine slicing techniques are essential to proper food preparation, as they are said to enhance the delicate flavors of seafood. The most famous regional dish is Fo Tiao Qiang, or "The Buddha Jumps Over the Wall," which contains a number of unusual ingredients including pigeon egg, shark fin, and sea slug. Legend has it that its delicious odor caused a monk to forget his vegetarian vows and leap over a wall to sample some, earning the dish its intriguing name. 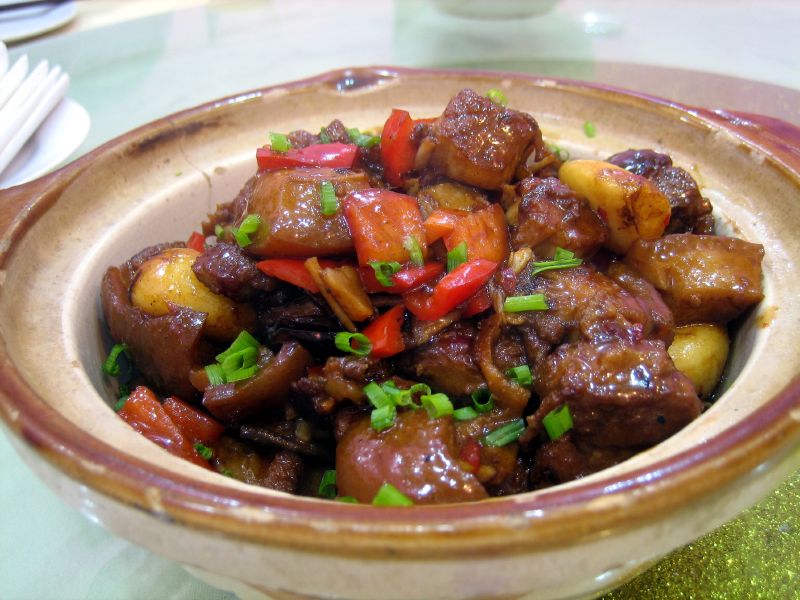 Typical Hunan dishes are known for their rich color and generous use of oil and spices, especially chili peppers. In the agriculturally fertile Hunan region, which lies on the southern bank of the Yangtze River, ingredients can vary widely. However, you are apt to find that seafood and rice are staples, frequently accented by chilies, garlic, and shallots. Hunan food is also known for contrasting sweet and sour flavors, delightfully demonstrated by Hunan spicy beef with vegetables, which combines tangy citrus and ginger with chili paste. Take advantage of being in the "land of fish and rice" by sampling something aquatic, like spicy frog legs, or stick to the Dong'an chicken -- a regional specialty consisting of stir-fried chicken and vegetables served with a generous amount of chili peppers. 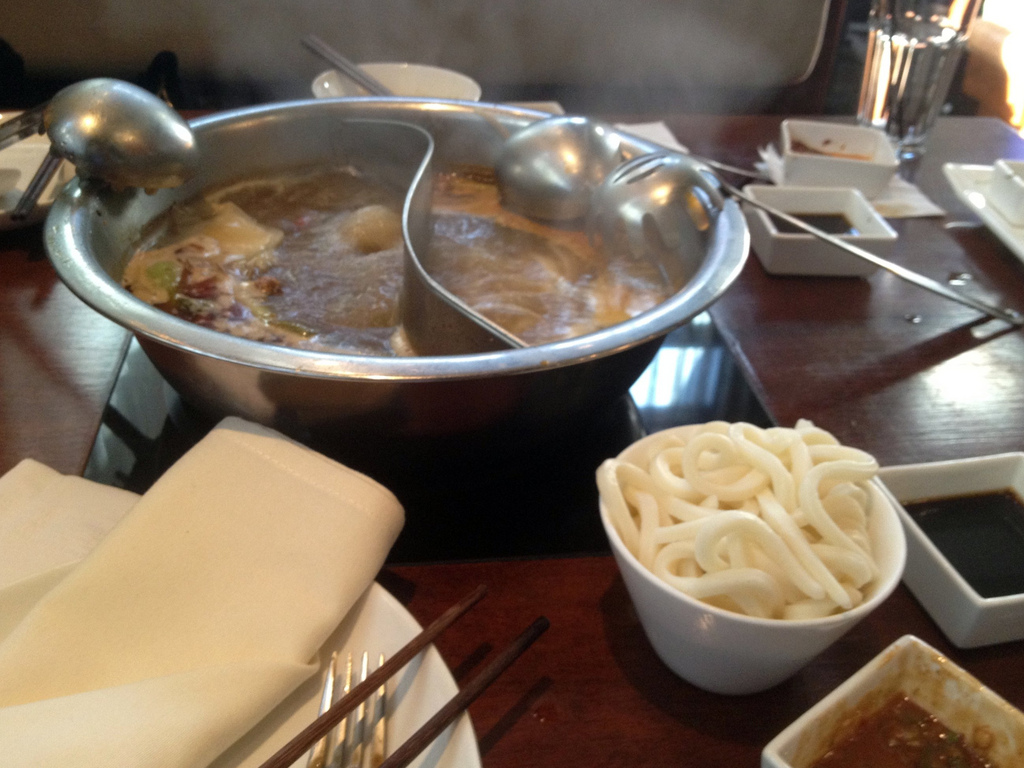 Like Hunan dishes, Sichuan cuisine places a heavy emphasis on pungent flavors and spices. Both prickly ash and chili pepper are frequently used to produce the notoriously strong flavors of Sichuan food, which also commonly contains meat and wild vegetables. If you are feeling brave, try Ma-La -- meaning numbing and spicy -- a sauce unique to the region that truly lives up to its name. The numbing sensation is caused by Sichuanese peppercorn, which is one of several spicy ingredients. We also recommend you also try a Hot Pot, which is sometimes referred to as Chinese fondue. Dip fresh vegetables, meats, seafood, and dumplings into a pot of simmering broth for a fresh cooking experience. 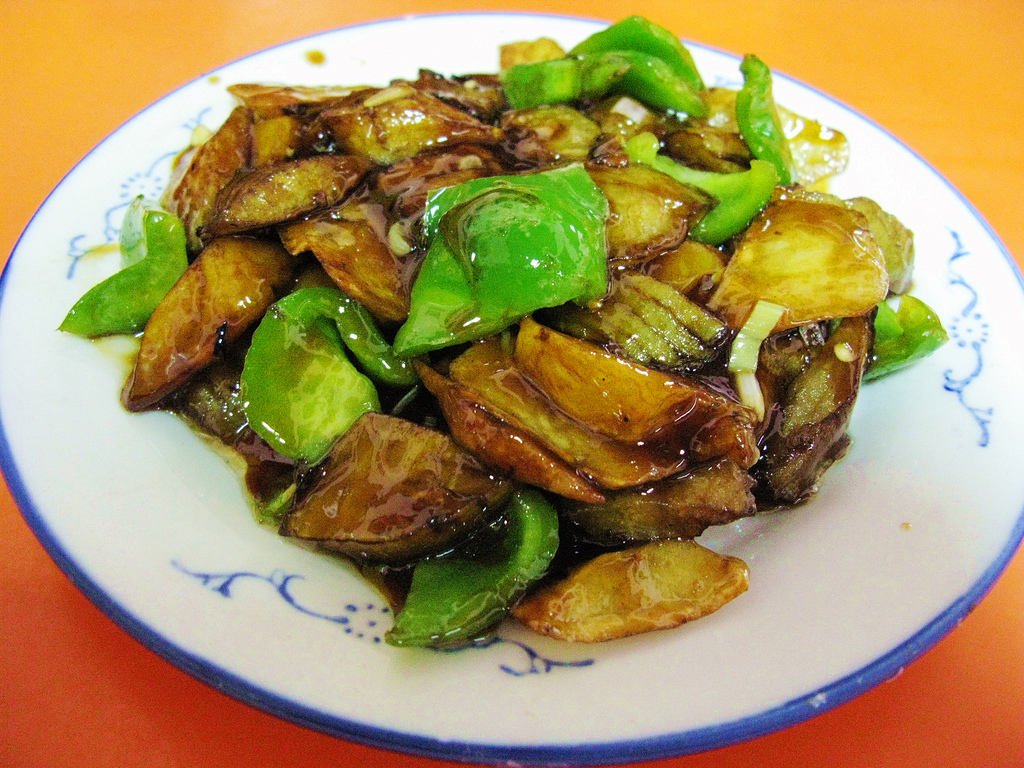 The food of the Northeast, also known as Dongbei, is a garlic lover's fantasy. The regions rich and warm food has been overlooked as "unrefined" in the past, as it is arguably not fully Chinese. With the Dongbei province bordering Mongolia, Russia, and Korea, the region's cuisine is evidence of some serious cultural intermingling. Rice is expensive and scarce in the Dongbei region, and so the dishes are traditionally heavy in noodles, dumplings, and bread. If you are looking for a signature dish, try the "Di San Xian," or "Three Fresh Things From the Earth." Comprised of eggplant, potatoes, and green peppers fried with garlic and vinegar, this vegetarian meal is popular among locals and visitors alike. 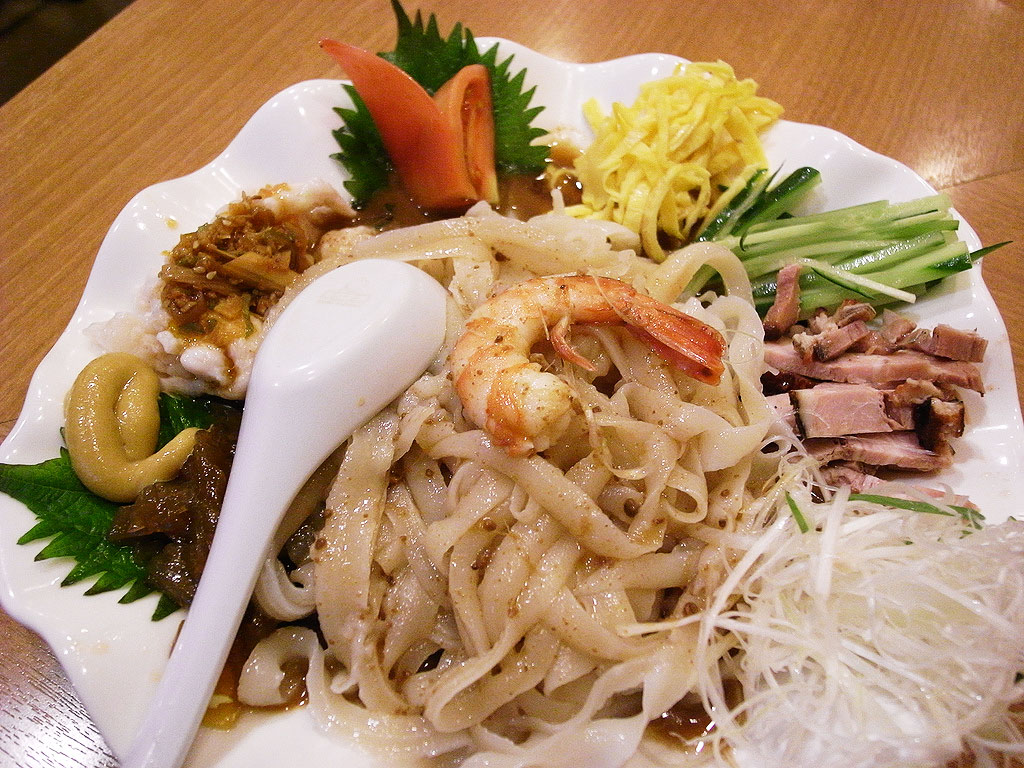 Muslim culinary traditions are featured prominently in the food of the Northwestern province of Xinjiang. Expect to find heavily spiced meat, potatoes, and a type of bread called naan--most familiarly an Indian staple. The province is known for its delectable noodles, and many of the best noodle restaurants throughout China are operated by people hailing from Xinjiang. Signature dishes include hand pulled noodles called la mian (or ramen, in Japanese). Dao Shao Mian -- sliced noodles -- are rapidly cut from a hunk of dough right before your eyes. 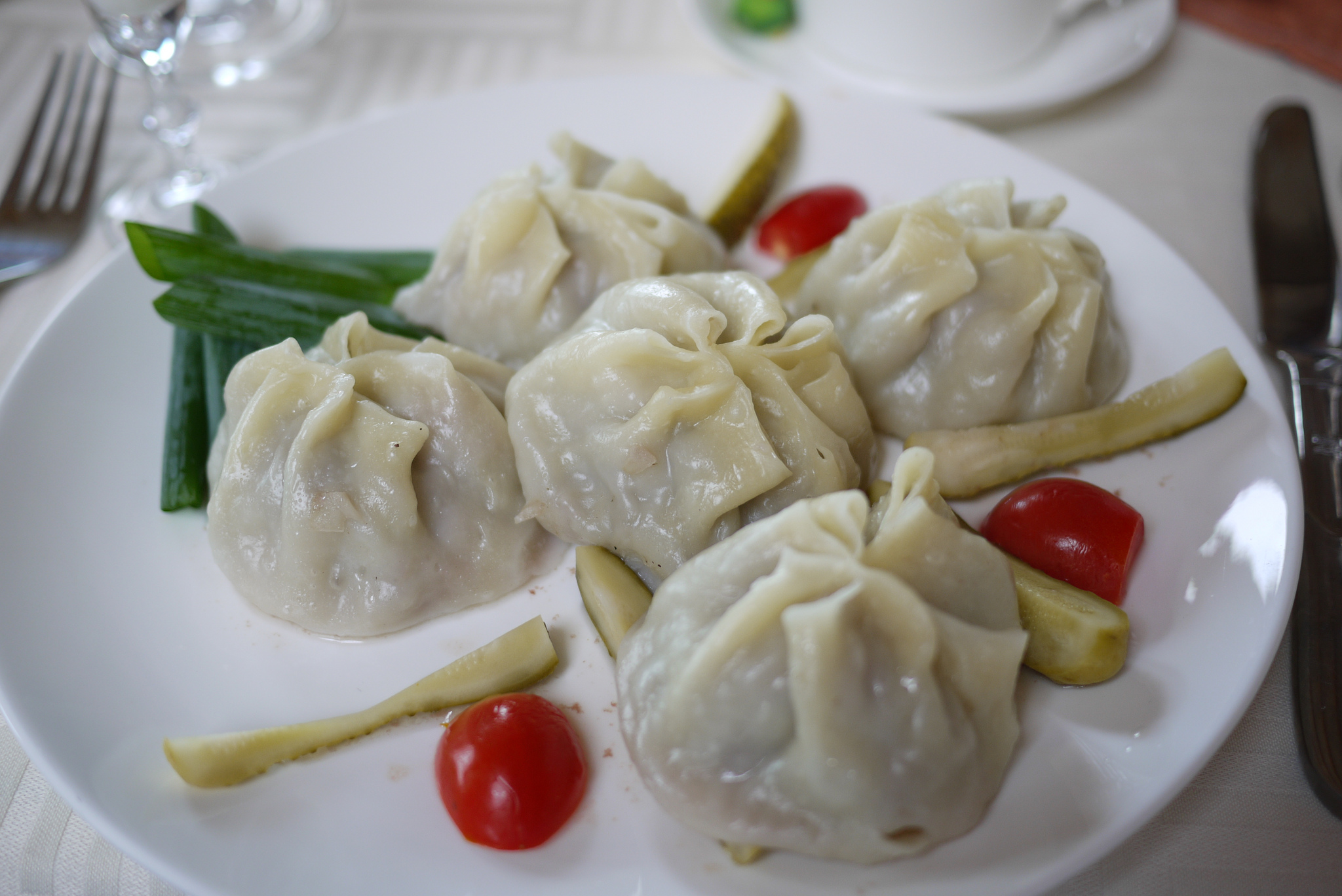 Despite its size, the Inner Mongolia region of China is sparsely populated -- by humans, that is. Its fertile grasslands are ideal for herding multitudes of cattle, camels, and yaks, making Mongolian food heavy in meat and dairy products and shares similarities with the neighboring Xinjiang district. If you venture to this region, you are likely to encounter a broad array of mutton dishes. One of the most popular meals is Buuz, or mutton dumplings, which are prepared by the thousand for Tsagaan Sar, the Mongolian New Year celebration. Salted tea milk is a local drink, commonly consumed with meals, which blurs the distinction between beverage and soup. Don't be afraid to get adventurous -- you may want to try horse meat, which is widely available, and airag, the national drink of choice made from the fermented milk of a mare (and yes, that is also horse!).

Good Eats: A Guide to the Must-Try Foods in China

Weird Food and Drinks You Must Try in Iceland: Puffin, Shark and Whale, Oh My