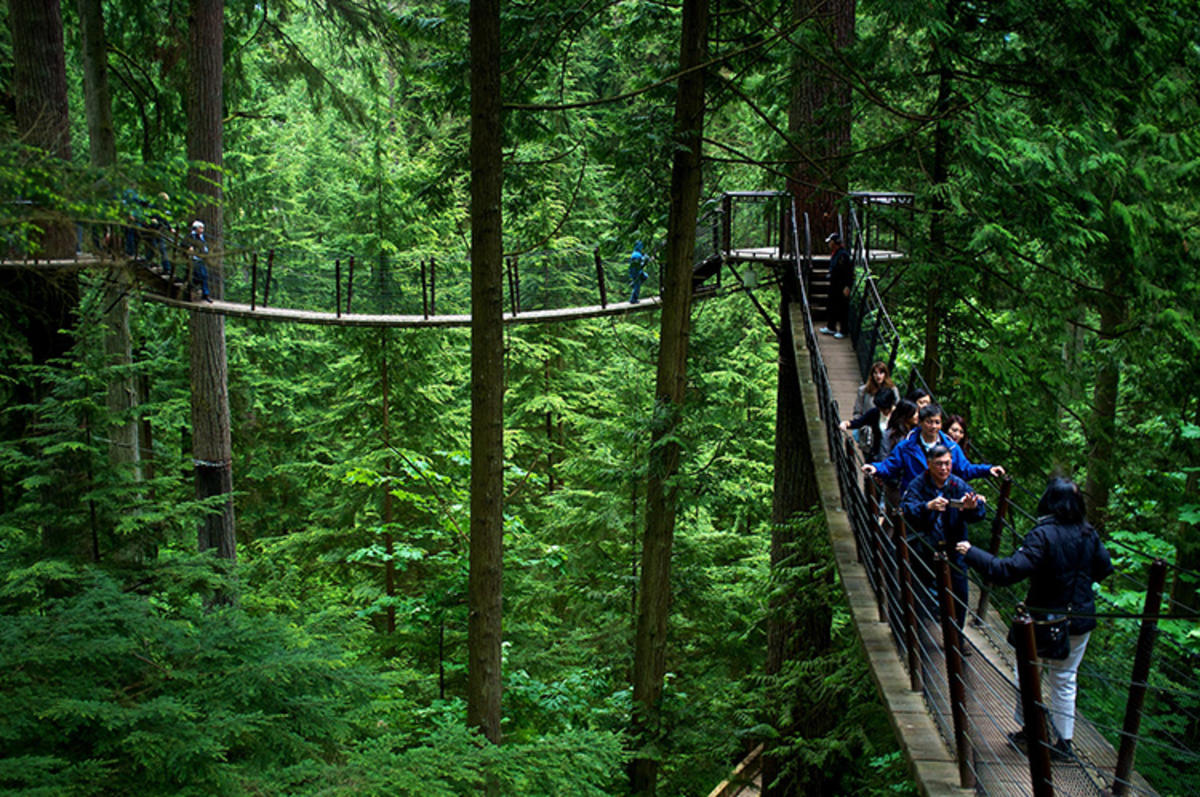 From its vast northern wilderness to the cosmopolitan cities of Vancouver and Victoria on its southwest coast, British Columbia’s attractions are even more varied than its landscapes. British Columbia is the only Canadian province containing rainforests on Vancouver Island, a desert in the Okanagan Valley, a ski resort open in the middle of summer, and even palm trees along some of its southernmost streets.

A surprisingly large percentage of Vancouver’s attractions lie within the boundaries of Stanley Park, the biggest park situated entirely inside a major Canadian city. Each year, more than eight million visitors explore by strolling or cycling along its scenic paved seawall, hiking its intricate inland trail network, or climbing aboard its miniature railway. Stanley Park even boasts its own free bus service, which makes one 45 minute loop around the park roughly once every 15 minutes in summer. The world-class Vancouver Aquarium stands close to Stanley Park’s eastern edge, while visitors can admire First Narrows and Lions Gate Bridge views from Prospect Point at the park’s northern tip. Other Stanley Park landmarks include the eight intricately painted totem poles close to Brockton Point and the Nine O’ Clock Gun which sounds at its namesake hour every evening. Address: Stanley Park Drive, Vancouver, BC V6J 5L1 Phone: +1-604-257-8400 Website: http://vancouver.ca/parks/parks/stanley/

Free shuttle buses are available to make the 20 minute trip from downtown Vancouver to the Capilano Suspension Bridge Park. Named after the 450 foot long bridge first built 230 feet above the Capilano River in British Columbia in 1889, visitors without any mobility issues or fear of heights will feel the bridge move beneath their feet if they dare to look down upon Capilano Canyon. You can also soar to impressive heights along the 700 foot Cliffwalk, 300 feet above Capilano Canyon’s east face, or enjoy the park’s rainforest from a squirrel’s eye view thanks to Treetop Adventures. Address: 3735 Capilano Road, North Vancouver, BC V7R 4J1 Phone: +1-604-985-7474 Website: http://www.capbridge.com

The numerous shipwrecks which once earned this part of southwest Vancouver Island its ‘graveyard of the Pacific’ nickname have long been replaced by hikers, sunbathers, and other visitors to one of Canada’s few stretches of temperate rainforest. Although the trails were first created along Vancouver Island’s rocky southwest coastline to save sailors’ lives, today’s visitors come for sightings of the orcas and grey whales in the water and cougars and black bears on land. Only the most experienced hikers should attempt scaling the steep climbs along the trail’s backcountry sections because it is a bit dangerous. Address: BC Parks, South Vancouver Island District, 2930 Trans Canada Highway, Victoria, BC V9E 1K3 Phone: +1-604-660-2421 Website: http://www.env.gov.bc.ca/bcparks/explore/parkpgs/j...defuca/

Yoho National Park may not be as well known as its Alberta neighbor, Banff, but offers no fewer skiing or sightseeing options. The 1,260 foot high Takakkaw Falls, Canada’s second tallest waterfall is the Yoho Valley Road’s end point and the starting point of several of the park’s hiking trails. Visitors can enjoy ice climbing and cross-country skiing in winter; summer bouldering and hiking, or watch trains enter and leave the park’s spiral tunnels throughout the year. Scenic attractions include the lovely glacier fed Emerald Lake and the natural water carved bridge across the Kicking Horse River. Address: P.O. Box 99, Field, BC V0A 1G0 Phone: +1-250-343-6783 Website: http://www.pc.gc.ca/pn-np/bc/yoho/index.aspx

At least 10 magnificent glacier peaks surround Rogers Pass Discovery Centre, whose namesake pass was once the most treacherous point of the Canadian Pacific Railway’s construction. Today, the world’s most state-of-the-art avalanche control system monitors the Trans-Canada Highway stretch along the area to keep it safe for visitors. Displays of wildlife, natural history, and railway models are exhibited throughout the year. Address: P.O. Box 350, Revelstoke, BC V0E 2S0 Phone: +1-250-837-7500 Website: http://www.pc.gc.ca/pn-np/bc/glacier/index.aspx

When Vancouver hosted the 2010 Winter Olympics, all of the skiing and sliding events took place at Whistler, North America’s biggest ski resort. However, Whistler’s attractions extend far beyond its slopes, from its three championship level golf courses to Lost Lake Park’s warm waters and scenic walking, cycling, and cross-country skiing trails. Tons of restaurants, hotels, and shops are situated within the European style villages at the base of both Whistler and Blackcomb. The 2 hour, 30 minute drive between Vancouver and Whistler along the Sea to Sky Highway has become much safer, but no less scenic, since the Olympic days. Address: Southwest British Columbia Phone: n/a Website: http://www.whistlerblackcomb.com/

Click here to learn about Food and Restaurants in British Columbia