For Colorful Houses and Crazy Photos: Port Hop Along the Wild Coast of Norway 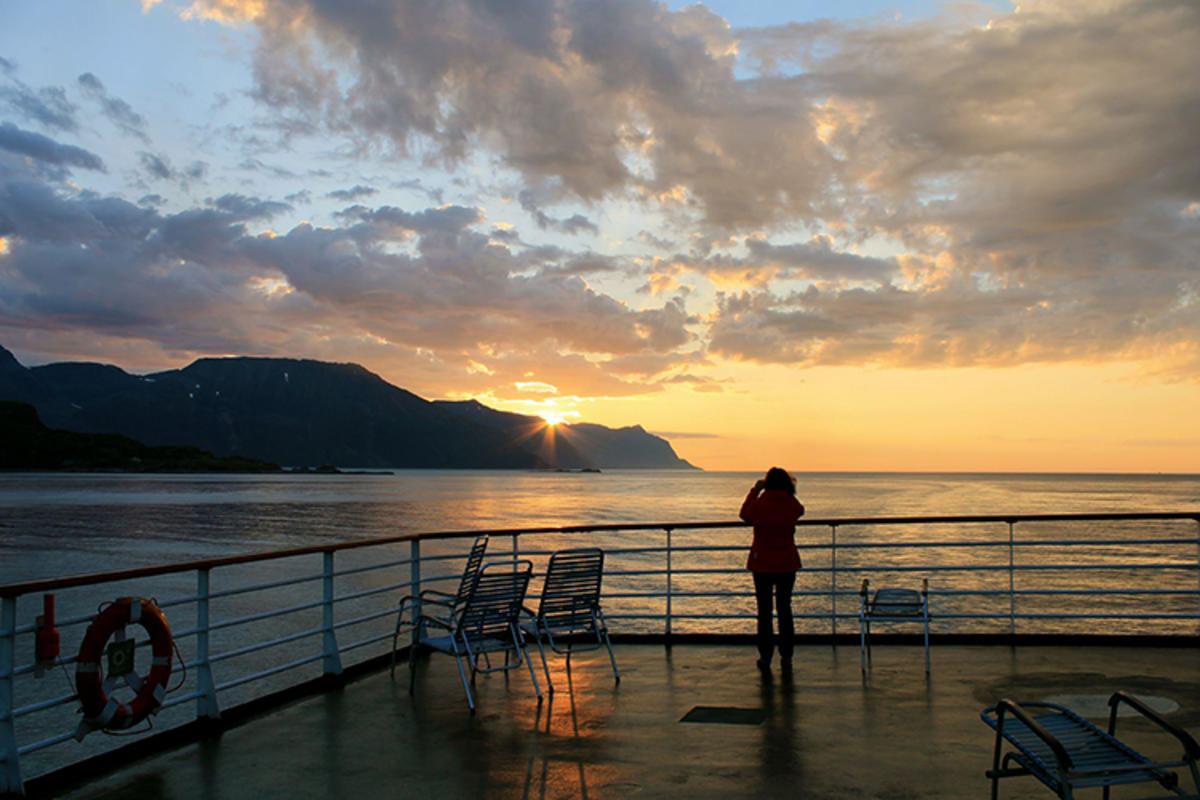 If you string together all of Norway's fjords, bays, and island shores, you'd get 63,000 miles of coastline. That's enough to circle the world more than two and a half times. That's a lot of coast! With all of that aquatic territory comes plenty of opportunities for exploration. Your best bet to see as much as possible is by boat. One option is the MS Midnatsol, one of the vessels in the fleet of Hurtigruten, a Norwegian company with more than 120 years of history. It travels back and forth from the northernmost points of the country to the south and repeat. With trips that stop at more than 30 ports, here are some of the key sights to see. 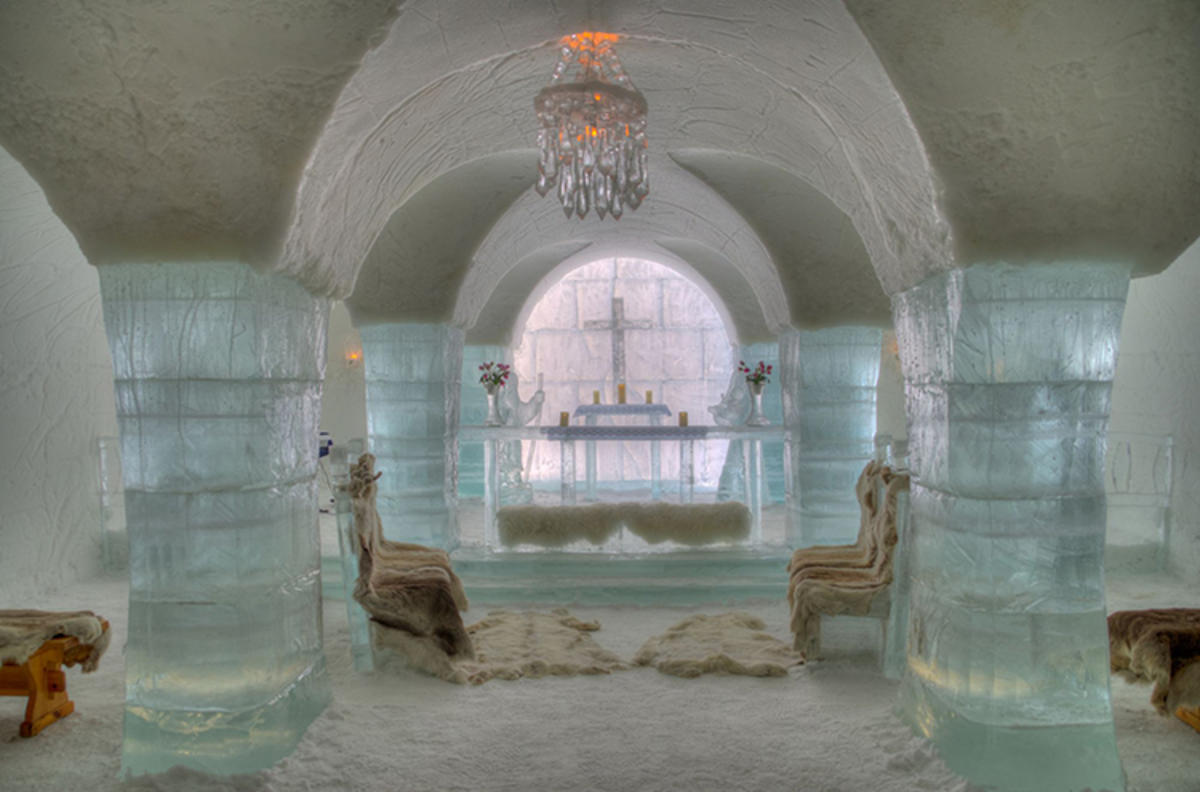 A two-hour flight north of Oslo, Kirkenes is a fine starting point to hop from port to port along Norway's Arctic coast. Not far from the center of town is the famous Snow Hotel, built new each December, by Japanese carvers. Each room has a different theme to keep it fresh, whether in the style of the old Vikings or pays homage to the movie, Frozen. Winter is the perfect time to visit if you want to bed down in one of the magical snowy rooms, but you can hang out any time in one of the cozy cabins onsite year-round. Its endless days are why Norway is called "land of the midnight sun." And that's good news if you like to pack your days with activities. 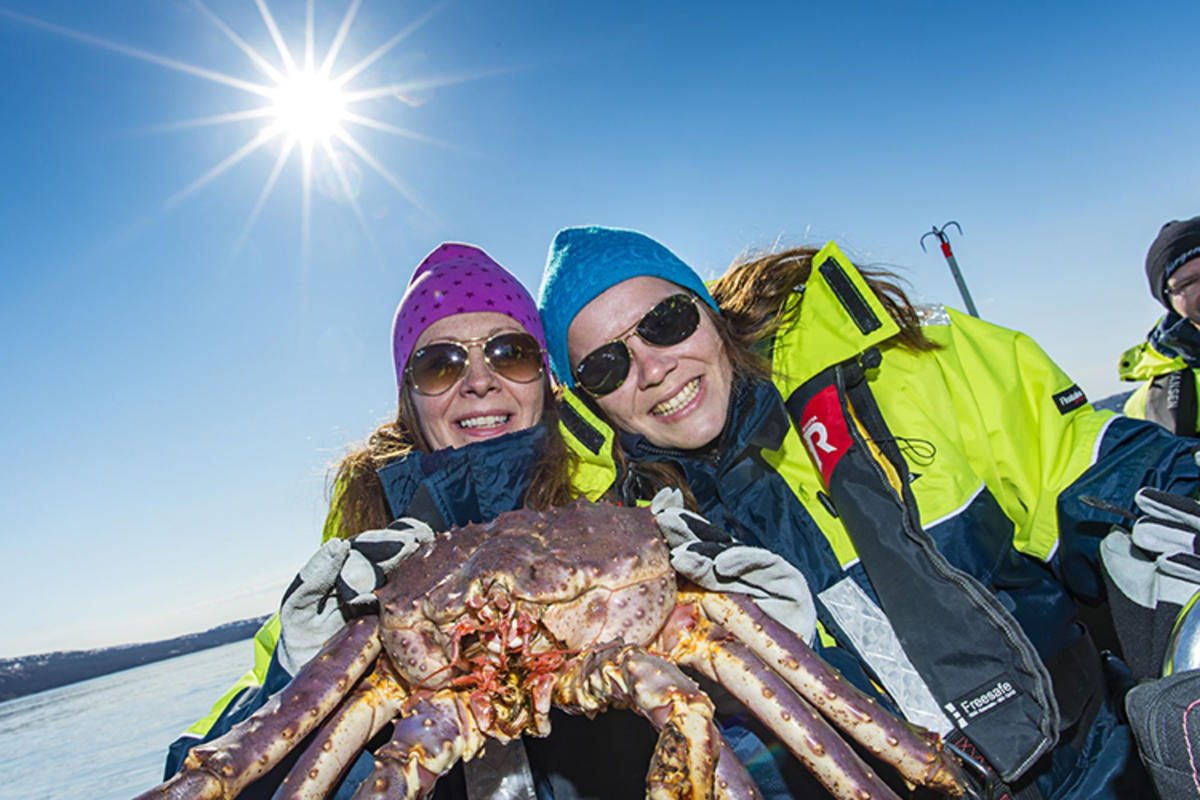 The Snow Hotel is fun central. You can hike the nearby trails, hang out with the resident reindeer, and snuggle up to the huskies who take visitors out on special sleds adapted for snow-free summers. Seafood lovers will want to sign up for the king crab "safari." You'll be bundled up in bright yellow suits to hitch a ride on one of the nimble RIB (rigid inflatable) boats, zippy vessels made by Zodiac. The temperature is just above freezing in mid-April and the water of Barents Sea is just as chilly, so the banana-colored onesies are essential for warmth as you head out to check the fishermen's traps, chockfull of enormous creatures that can span more than six feet. At a fishing shack nearby, they are cooked up, enough so everyone can have seconds, thirds and fourths.

Hammerfest claims that it is the most northernmost town in the world, but there's another town in Norway competing for the title. Regardless, this port with just over 10,000 inhabitants is small, but you'll have a good chance of seeing the Northern Lights (aurora borealis) when the sky is clear from September to March. It's also home to the Royal and Ancient Polar Bear Society. That name is a bit of a joke because it started not so long ago in 1963. But while in port, you can visit its one-room museum, featuring exhibits about the town's history as a hub for trading and hunting, complete with a myriad of stuffed animals. In the summer, watch for the reindeer flooding into town - upwards of 3,000, a crazy phenomenon during migration.

Next up, Tromso is one of those cities where new and old seem to collide. While it has one of the highest concentration of wooden buildings, some dating back to the late 1700s, it also has funky contemporary constructions like the Arctic Cathedral, a mid-century modern design made primarily out of concrete in 1965. It's the most famous landmark in the area thanks to it's weirdly futuristic look. Passengers can sign up to attend a midnight concert and check out the acoustics. 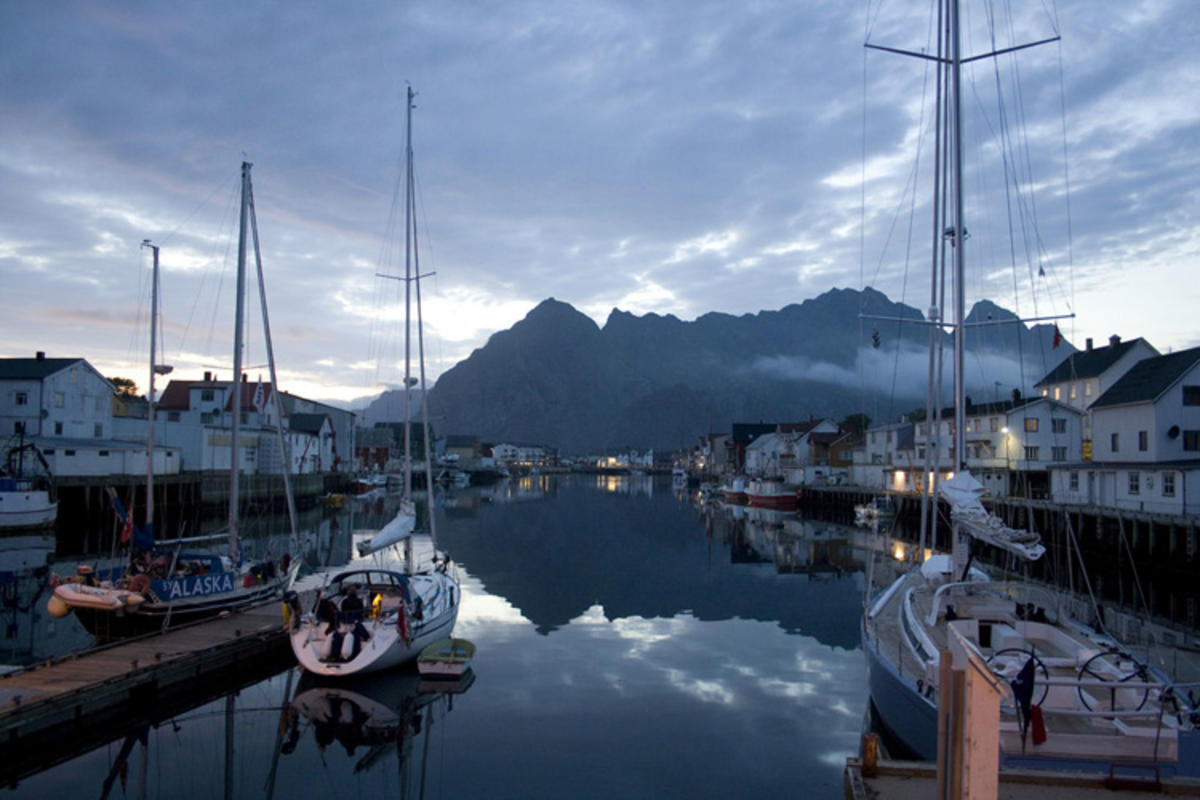 Though the scenery is clearly the star attraction while traveling down the coast, the ports are stunning, too. Houses painted in bright hues are stacked along the shore, providing a colorful welcome to Verstalen. Racks and racks of cod drying in the sun announce that the area is all about fishing. This makes it a good spot for a sea eagle safari, an excursion where you can watch massive birds swoop down from the sky to snatch fish straight out of the sea with their sharp talons. 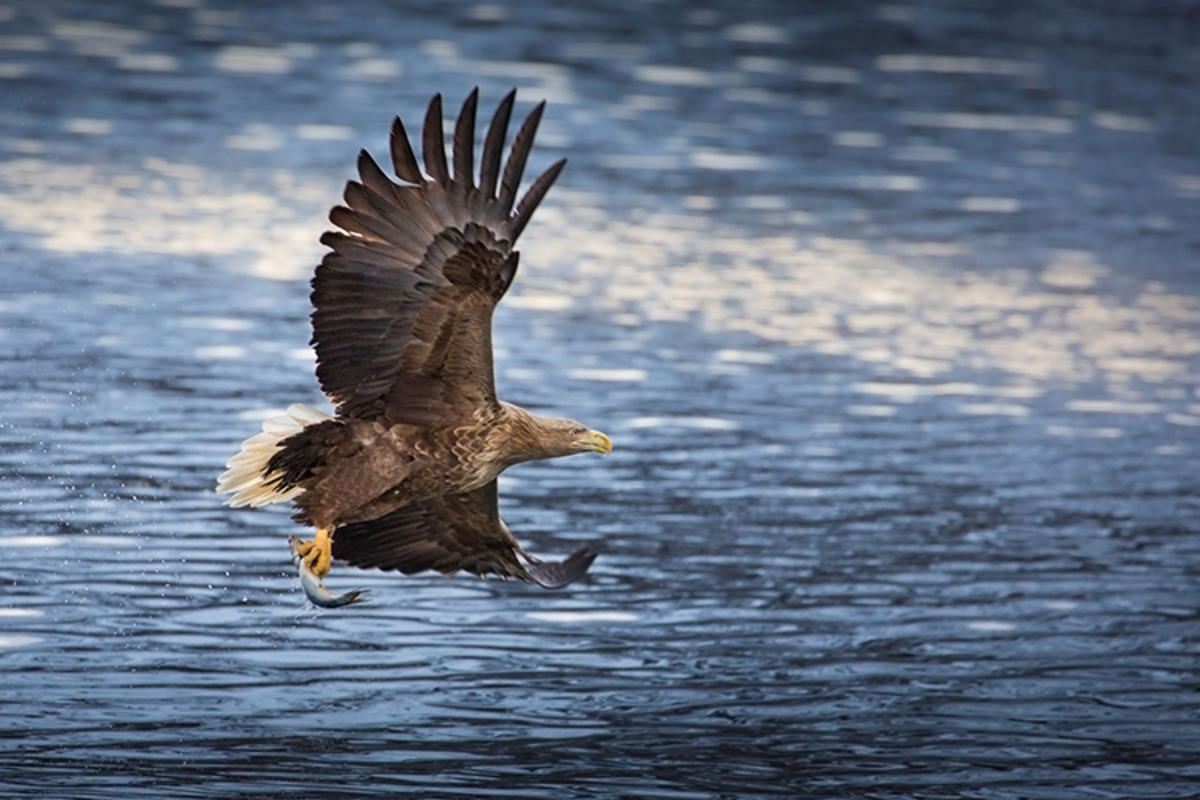 If the plethora of themed souvenirs didn't tip you off, Norway is steeped in Viking history. Sprinkled across the country, museums showcase the culture of these fearsome warriors, like the one in Harstad and its Trondenes Historical Centre. You learn that Vikings were early lumbersexuals and could really rock a beard. Close by is a picturesque medieval stone church dating back to the 13th century, perfect as a backdrop for a few selfies. If history isn't your scene, go for a swim and a soak at Grottebadet, a sprawling water park complete with slides, jacuzzis, and therapeutic pools, located in a series of caves beneath the city.

The community of Henningsvaer is a surprise. Artists have flocked to this small fishing village for decades, setting up galleries and studios. And they aren't all painting landscapes and flowers. KaviFactory, a former caviar factory circa 1950, has some of the edgiest contemporary art sourced internationally seen east of Greenwich Village. It's definitely worth a look. 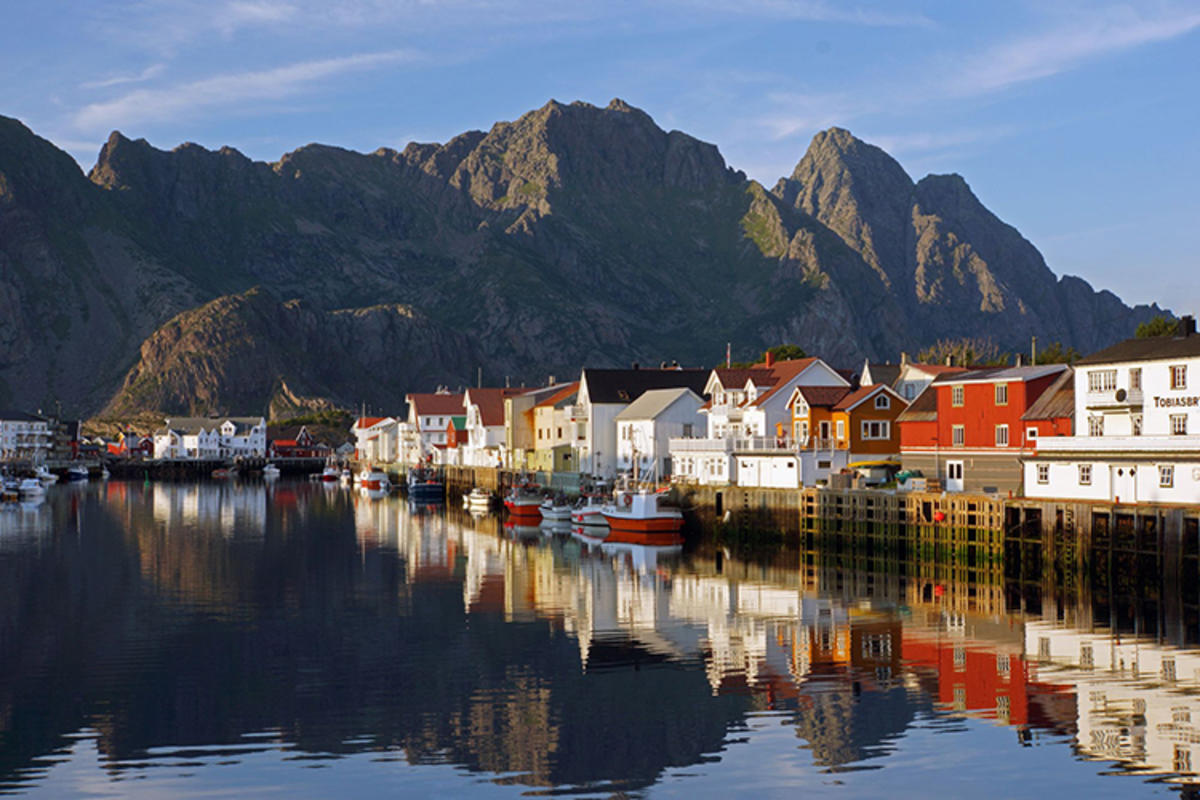 Bergen is Norway's second largest city and a robust cultural center. Everyone from the Foo Fighters to Kanye West have played here. Theatre fans will appreciate the fact that playwright Henrik Ibsen who wrote A Doll's House (said to be the most performed play of the 20th century) got his start worked at the local theater. You'll spot a number of statues in the park honoring the man, said to be a bit of a talented crank. The city is chock full of Art Nouveau architecture, museums devoted to everything from decorative arts to leprosy(!), shops selling wool sweaters and trolls, and unique restaurants like Munken Bistro, a mash up of Peruvian and Norwegian cuisines. Take the funicular up to the top of the mountain to soak in all the scenery. Like the rest of Norway, its unspoiled, rugged beauty inspires awe.

Getting Married On A Cruise? Things To Consider

Michele Sponagle is a prolific journalist, based near Toronto, Canada, who has visited more than 70 countries, where she has tracked polar bears in Manitoba, fished for piranha in the Amazon and soared over the Masai Mara in a hot air balloon.