Content produced in partnership with Thuringia Tourism and the German National Tourist Office.

Sometimes it’s hard to fit everything you want into a road trip vacation — maybe there’s a trade-off between enjoying a place’s youthful ambience or its historical significance, or maybe it’s just a pain to get everywhere you want to see. Luckily, there are no tradeoffs in Thuringia. Where the wall once stood through Thuringia, formerly part of East Germany, is now lush greenery known as the Green Belt that is scenic perfection for outdoor lovers.

Along the same area offers numerous museums and memorials like the Mödlareuth Two Germanies Museum and more. This area is a perfect way to immerse yourself in nature while taking in modern history. It's no wonder Thuringia is known as the "Green heart of Germany." Take one of the numerous trails for a hike through the virtually untouched greenery before heading into the exciting cities. Home to about 20 UNESCO World Heritage Sites, medieval castles, historic planetariums and the youthful vitality of numerous universities, Thuringia lets you have your cake and eat it, too.

The capital city of Erfurt is known, in part, for its fabulous sweets. Check out a true Erfurt speciality, Goldhelm Chocolates! The name is a commonplace in Erfurt, and they have numerous stores in the city that offer their carefully crafted chocolates, pralines, and ice cream. In the warmer months, you'll find long lines waiting for their delectable ice cream, and in the winter, lines stretch out the door for boxes of chocolates to give as gifts. You can't find these incredible treats anywhere else in Thuringia, so be sure to get your fill before you leave and leave room in your suitcase to take a few boxes home. 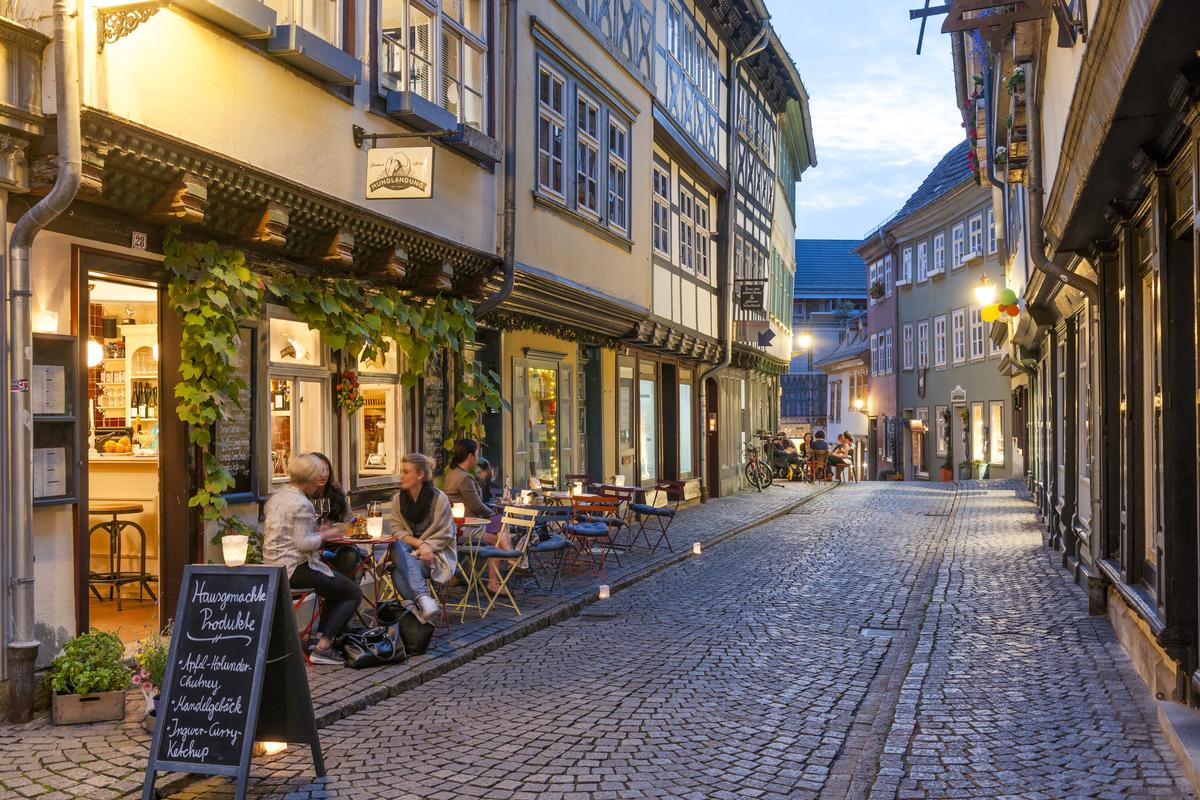 Goldhelm Schokoladen Manufaktur in Erfurt also offers a perfect pairing of wine and Goldhelm chocolate, because after all, what goes better with chocolate than a glass of wine? Now if skipping the sweets and indulging in an Erfurt libation is more your style, there’s plenty of options to try, including wine from the picturesque Saale-Unstrut area.

Now that you’ve gotten a taste (literally) of Erfurt, it’s time to take in the amazing cultural stops and history the little capital city has to offer. Erfurt is home to the longest inhabited bridge in Europe, and it’s a site that only visiting will do justice. On Merchant’s Bridge, visitors can shop traditional Thuringian goods, peruse galleries and sip on coffee outside the cafes. They can even stop by one of the Goldhelm shops for a sweet treat here.

On the eastern end of the bridge is the Church of St. Aegidius. The views from the tower are breathtaking: Look out over the water and see shops and homes that dot the landscape like a painting. If you get to head to Erfurt in June, you can’t miss the Merchant’s Bridge Festival, a cultural collection of food, music and hand crafts that lasts only a handful of days.

Another stunning stop as you take in Erfurt’s architectural history is the Cathedral of St. Mary, also located near Merchant’s Bridge. The Gothic-style cathedral, complete with spires, a high Gothic choir and Romanesque tower is also home to the largest medieval free-swinging bell. And, while the cathedral is a sight at all times, cross your fingers for a sunny day to take in the beauty of the colorful stained glass windows all around the cathedral. Tours of the one-of-a-kind structure are available and highly recommended. 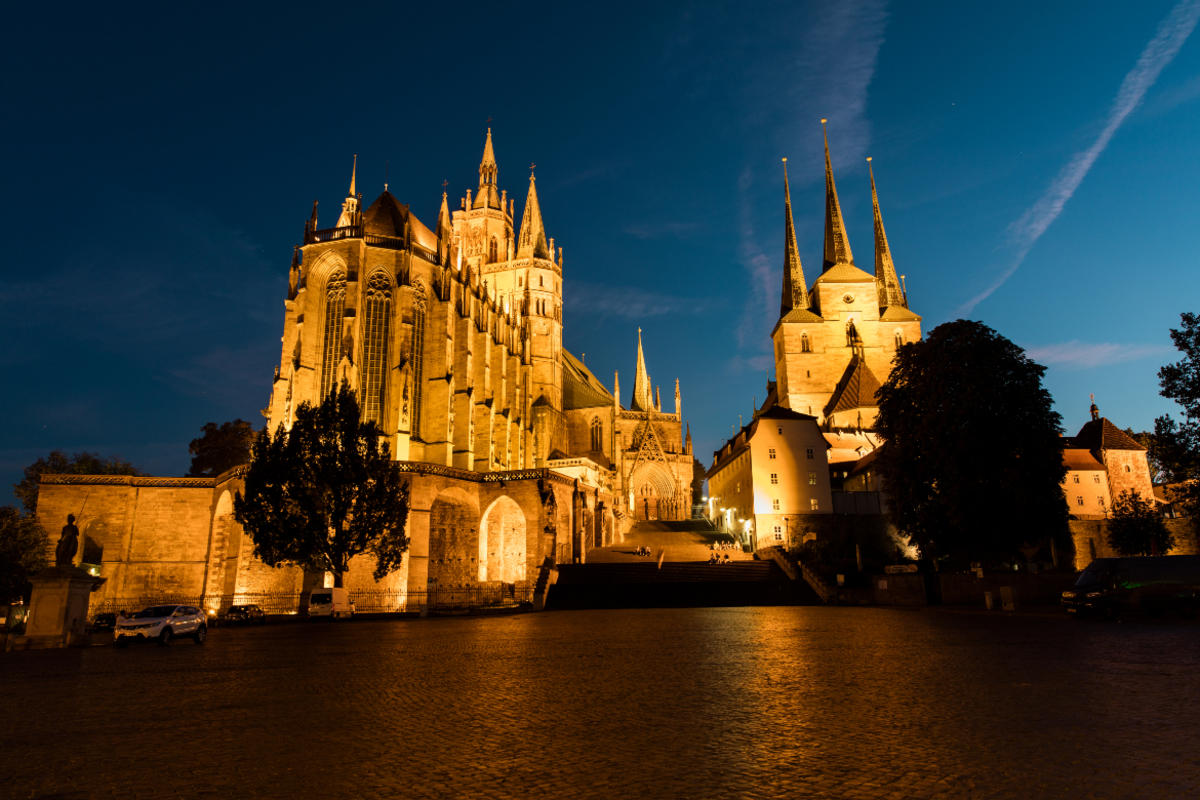 Erfurt is incredible in that it manages to encapsulate rich, beautiful history while making space for modern influences. The Erfurt Theater, a state-of-the-art home to opera, musicals, dance, guest performances, and more, is known throughout the region and abroad for the variety and quality acts here nearly 200 days a year.

The theater also puts on the Cathedral Steps Festival every summer against the backdrop of St. Mary’s Cathedral, whose 70-steps of cathedral hill act as a stage. This beautiful festival draws people from all over the world to take in the beauty and culture of Erfurt.

Visitors can also visit the Zughafen, a modern music and event space in Erfurt. The primary building, a former train station, was renovated by two musical artists who had a vision for an exciting, vibrant venue, and they certainly delivered on that mission.

Another noteworthy festival, the Achava festival in September, celebrates Jewish religion and culture. Achava means “brotherhood’ in Hebrew, and the word takes on a special meaning at this festival that offers a celebration of discussion and thoughts on contemporary topics, as well as concerts.

The small town was known as the cultural capital of Europe in 1999, so if that tells you anything, it’s that Weimar is a necessary stop on your Thuringia road trip. It boasts amazing museums and historical monuments, but much like many cities in Germany, Weimar is just as alive and vibrant today as it was centuries ago when greats like Johann Wolfgang von Goethe, Friedrich Schiller, Johann Gottfried Herder, Johann Sebastian Bach and more called it home.

Weimar has been called the cultural capital due to its 16 UNESCO World Heritage Sites designations linked to the period of Classicism and the world-famous Bauhaus school. Visitors can immerse themselves in the cultural and historical magic with a three-day walking tour that covers all sites. 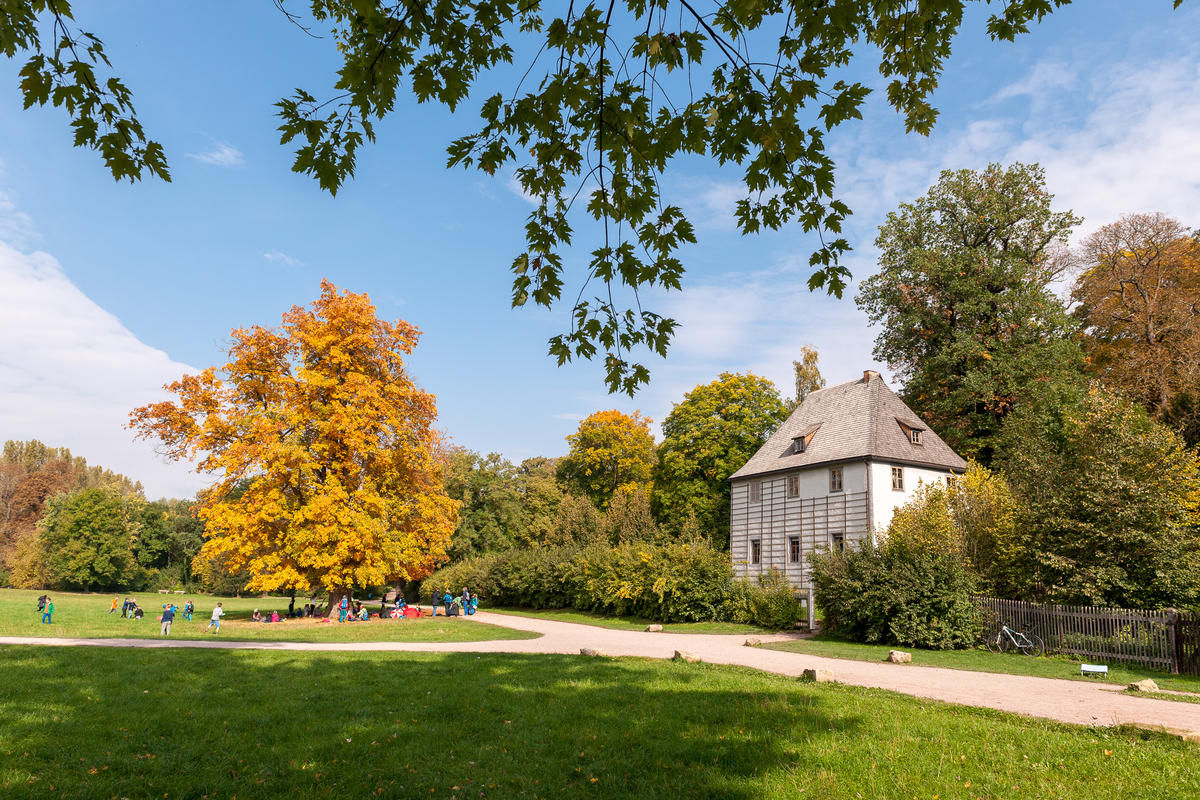 The first day takes you on a tour of the Old Quarter, to streets where greats like Goethe, Schiller and the Duchess Anna Amalia themselves walked and into buildings where they lived and worked - where they created master pieces we all know as the evergreens from the classical period. See the beautiful restored Anna Amalia library with thousands of books that date back to the 9th century, including one of the first Luther Bibles.

On the second day, go castle hopping! See Belvedere Palace, Ettersburg Castle and Tiefurt Castle, but keep in mind, this portion of the tour requires transportation.

The third day covers the early Bauhaus history: The Bauhaus school of arts that was founded exactly a hundred years ago is now a place to see a perfect meshing of historical significance with modern vibrance. It’s a hub for nurturing and inspiring that same kind of innovation. It offers more than 40 courses of study for students, and if you can, catch one of the many inspiring presentations that often occur on campus. The tour also leads you to the first model house “Haus Am Horn” and the newly-opened Bauhaus-Museum. All sites are connected by the Park by the River Ilm, Thuringia’s largest landscaped park and is designed in 18th century English style.

2019 is a special year for Weimar, as it marks the centenary of not only the founding of the Bauhaus but as well as of the Weimar constitution, the first parliamentary-democratic constitution ever signed on German soil. Both of these things were decades before their time, with the constitution recognizing gender equality and the Bauhaus in how it revolutionized media, art and architecture.

Beside all the Bauhaus-themed events, don’t miss out on the annual festivals, like in August: Genius Loci Weimar, an audiovisual projection festival will feature some of the top audiovisual creations touching on the two centenaries and other cultural and societal influences and happenings.

It’s no wonder that Weimar is consistently known as a cultural capital, as there is no shortage of embracing history while still making enormous progressive strides.

In 2008, the city of Jena in Thuringia was named “The City of Science,” so it comes as no surprise that it is both a city full of young students but also one that is heavily rooted in history. As we approach 30 years of German reunification, visitors can see the contrast between Jena's peaceful natural area complete with a river and beautiful parks, and the vibrant city it offers. 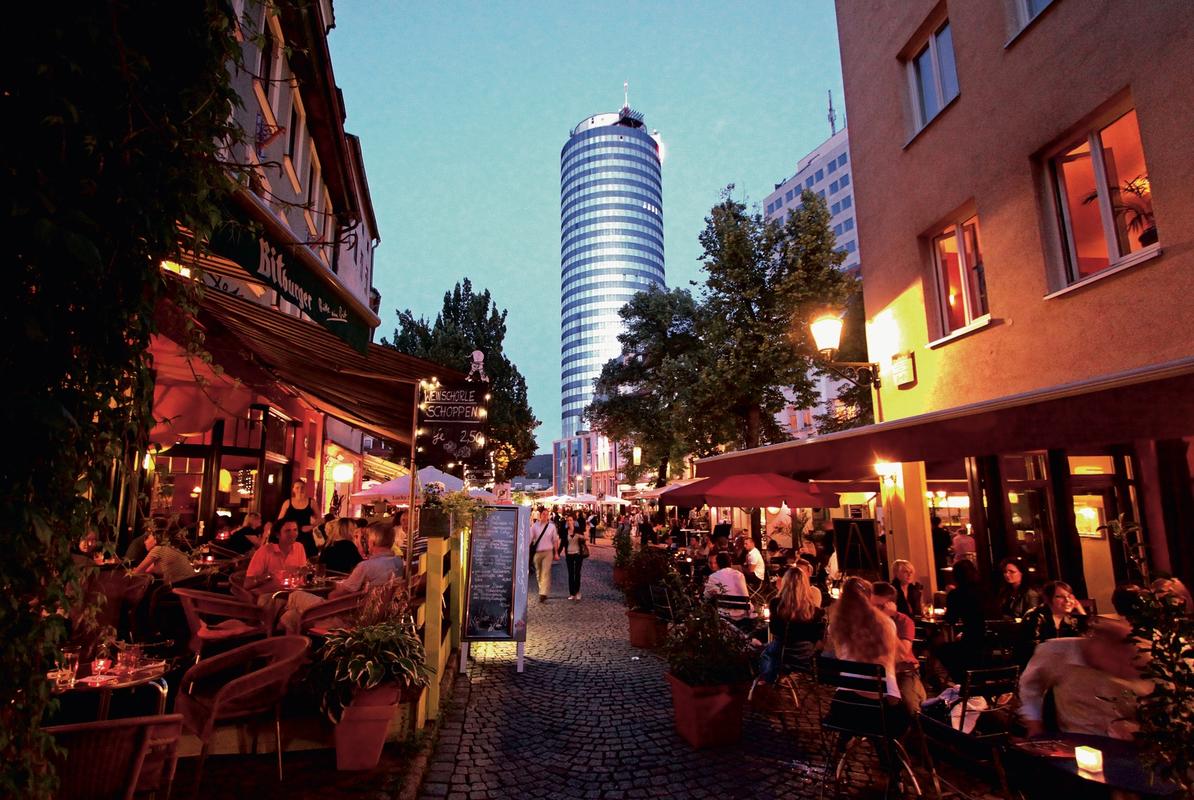 The now-university city even centuries ago was a city known for scientific innovation, with Friedrich Schiller, Alexander von Humboldt, Johann Gottlieb Fichte and more having left their mark here, so it stands to reason so many of their attractions speak to scientific feats.

See the Zeiss Planetarium, the oldest operating planetarium, which features a full-dome digital projection of the stars with impeccable detail. Also be sure to check out the Deutsche Optische Museum, the home of the largest eyeglass collection in the world and exhibits on the making of the first glasses.

And when you’re not broadening your mind to become the next great something in Jena, enjoy one of their many festivals, their music, bars or theatre.

For a phenomenon unlike any other, visit Jena in the July and August months for their 50-day open air festival full of music and culture. Kulturarena brings in big names and local acts, hip-hop, pop, classical music and more and even films. During these six weeks, the entire town is abuzz, and it is truly an indescribable experience to be immersed in it.

Strand 22 is a pristine beach bar, restaurant and gathering place on the Saale River that is a must-visit in the summer months. It’s truly a hub for people in the area to enjoy the weather, live music, readings or just a relaxing drink.

Another stop on the list for visitors and locals alike is Cafe Wagner, a trendy student cafe that turns into something of a club at night for live music, slam poetry, performances and more. The versatile spot sums up the vibe of Jena well — eclectic, smart, and just overall really cool.Before you leave Jena, climb your way atop the newest landmark, a tower-like building dubbed the “Stack of Biscuits” and look out across Jena and the Saale Valley — a truly Instagrammable moment.

While each city in Thuringia is unique and offers a plethora of cultural and historic ways to spend your time, Erfurt, Weimar and Jena are must-see stops on your German road trip. We promise you’ve never seen anywhere like these cities. 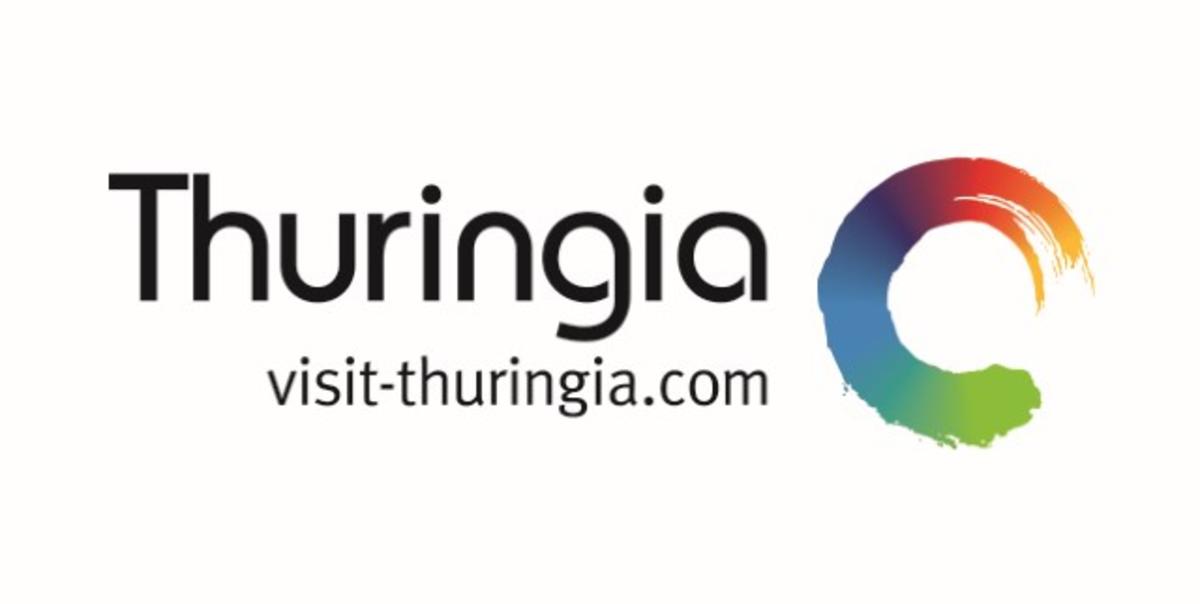